The Saga of The Sails 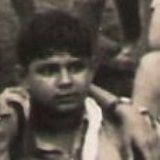 - Bruce Gillespie – When in Std VI

If we walk along Apollo Bunder we see numerous sailing ships of various sizes.
These boats are used for joy-rides, and people dressed in gaily colored clothes get into them to go on their picnics.
Long, long ago, when steam ships were not known of, sailing ships were of great importance. They were used in times of War, and for Trade purposes. The sailing ships of old had many sails, and were propelled by means of oars, and sails to catch the force of the wind. When bigger ships were built the number of masts were increased from two to three. These ships were sometimes called 'Luggers' and had a running bowsprit. There was another type of vessel called the 'Lanteener', because it was equipped with Lanteen sails on one, two or three masts. Besides these sailing vessels there were others called 'Cutters', 'Yawls', 'Brigs', and 'Schooners'. During the reign of Queen Elizabeth, the English were eager to discover new lands and find new sea routes; this led them to improve upon their sailing ships. They wanted to do what Spain had done in the field of discovery. Columbus had sailed in the ship named 'Nina' and discovered the New World. Vasco da Gama of Portugal had set out with three sailing vessels, and '160 men, when he doubled the Cape of Good Hope, and found the sea route to India.
The Trade Winds got their name as they made the sailing snips go faster. Sailing boats, however, have many dis-advantages. They need many rowers, and take more time than steam ships to reach their destination; moreover, when. there is a storm, they are more easily destroyed, because they do not have signaling apparatus to direct the boat to safety, and to send out S.O.S. signals. Sailing ships are not as comfortable inside as a steam ship. But before the beginning of the eighteenth century sail¬ing ships were the only means of com¬munication on sea. England had the best Navy, and it was because of this, that, Nelson proved to be the greatest Admiral the world had ever seen. From Nelson's time onward England never failed to produce great Admirals and has always been the 'Mis¬tress of the Seas'. When steam ships were invented, sailing ships lost their importance, and now¬adays we rarely see them. They are used for fishing, carrying goods along the coast, and for pleasure trips. People may prefer steam ships, but I certainly like a sailing ship because it costs less, and I could have a small ves¬sel of my own.