My Days At Adampur 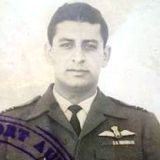 The trusty alarm clock woke me at 0630 hours, to complete my morning chores, like filling up my fresh drinking water and other minor odds and ends. My Zinnia has gone to the USA on a flight, and I am all alone at home. Eagerly awaiting the arrival of the morning Newspapers, which I scan from page to page.
The Papers have just arrived, have set up my electric kettle, for my morning cup of Coffee and to continue with my post.
Talking of being all alone at home, reminds me of a few precious lines from, William Wordsworth, 1770 to 1850. For him to conjure up these lines, I am convinced he had the Blessings of the Super Power, which we Humans refer to as God. Here they are:-

For oft, when on my couch I lie
In vacant or in pensive mood,
They flash upon that inward eye
Which is the bliss of solitude;

I travel, back in time, to my days at Adampur, which is roughly situated between Jullundur and Hoshiarpur, in the Punjab. There are only four Parsis on base, namely, Wing Commander Lalkaka, Flt. Lt. Dara Chinoy, Flt. Lt. Manek Madon and myself. Wing Co. Lalkaka is the Officer in charge Flying. Our Station Commander then was Group Captain Lloyd. Groupie Lloyd had a beautiful Daughter and she was the cynosure of all eyes, at the base.
Manek Madon had somehow managed to get onto the inner track with this lovely lady and professed his undying love for her, and he had succeeded.
Maybe, due to the intense heat of the Punjab, in the Summer, where his brain had fried, he had proposed to marry her, and she had most willingly accepted, his proposal. Or as Rudyard Kipling would say, 'Where the 'eat would make your bloomin' eyebrows crawl'.
But all at base were not happy with this setup, especially, the Flight Commander, of Manek's Squadron. This Officer was already a married man with his Wife very prominent at the base. But Love and the intense heat are a heady mixture and the Flight Commander secretly blamed Manek, for the loss of his True Love.
This according to Manek is what took place next. He narrated the incident to me.
One morning, Manek is rostered to do formation low flying, with his Flight Commander. Manek is informed that he is to be in the Starboard Echelon position. Starboard Echelon amounts to being on the right of your Leader, in extremely close proximity, and your eyes are riveted on the lead aircraft. They are flying at about fifty feet of the ground and the Flight Commander hand signals a hard turn to the Starboard. The lead aircraft is at fifty feet of the ground, but his number two, Manek, is literally skimming the tree tops of the terrain, in order to maintain the formation, with his eyes just glued onto his leader. The clear intention was to send Manek to his death and clear the Path of True Love.

Needless to mention that Manek refused to fly low level formation, with his Flight Commander.

Then another brainwave was registered in Manek's mind. He decided to wed at the earliest. The young lady in question was in eternal bliss. Then Manek wrote to his Dad, in Hyderabad, of his honourable intentions. Whether his Dad was the High Priest of Hyderabad, I am not certain, but, he was of the Priestly Class. The Father replied back that it was truly wonderful that his eldest Son was getting married and he should come over to Hyderabad, at the earliest, to discuss the Wedding plans.
Manek was immediately granted leave and departed for Hyderabad.
The reception party, headed by his Father and the entire family, received Manek at the Hyderabad airport. Manek was in Cloud Nine with the welcome that awaited him. Suddenly the Father imparted two resounding slaps on Manek's face and this is what he said.
'Behanchod (Sister Fucker), you want to marry an Anglo-Indian girl an have the audacity to write to me about it. To Me, your very own Father of all people, who is of the Parsi Priestly Class, where Blue Blood flows in my viens. Your intention to get married is unequivocally accepted by our entire family, but, to a Parsi girl of our choosing'.
Manek was made to wear a white shirt, white pants and the traditional Dagli, with a Phanto on his head, at the airport itself. A coconut was placed in his hands, for good measure, and was escorted immediately to the Wedding Ceremony and forced to marry a bride not of his own choosing.
On his return to Adampur the Groupie's Daughter was completely heart broken.
But in Life, Happiness and Sorrow are distributed in equal measure.
The sorrow that the lady in question felt was directly proportional to the Happiness that the Flight Commander felt.
In 1982 or 1983, I met Manek and his Wife at the Delhi Dharamshala, which also houses an Agiary. It was the first time I laid eyes on his Wife. They had come together to offer their Prayers to Ahura Mazda. On my seeing them together, I went across and asked Manek, in his Wife's presence, if this was the Same Lady who had caused a Violent Storm, in Adampur, which was a precursor to the attack by the Pakistanis. At first, Manek was getting enraged, but, on hearing his Wife laugh, suddenly the three of us burst out in laughter.
In the Pakistani Conflict of 1965, Dara Chinoy baled out in Pakistan. He hid by day and ran by night till he reached our borders, after three days.
Needless to mention a HEROES WELCOME awaited him, from the entire base.
One night a Pakistani aircraft was shot down over Adampur. The crew of the ill fated aircraft were Rehman and Choudhry. We brought them over to our Bar, wined and dined them, before they were taken away for questioning by the Security Personnel. Their Helmets, which had their names inscribed, were kept in the Bar, as a momento.
I sincerely hope they adorn the Adampur Bar, till today.