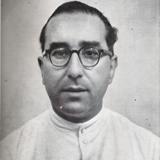 It is indeed with a feeling of pride that I hail the first appearance of a School Magazine. For over a year the first seeds of this idea have been nurtured with loving care. A first shoot appeared some months ago, but the ground was not yet ready to bear the full bloom of achievement; however the seeds had not died. They were slowly but surely taking root until a month ago, when a vigorous shoot appeared and finally blossomed. It is now here for all to see.
Practically the whole school with few exceptions contributed something or the other. What appears in this Magazine is a fairly representative selection of he best among the many contributions. I am sure there will be some disappointments. But let those who wrote but failed to pass the grade persevere n their efforts. The standards are high; but one day in future editions their contributions will finally appear, and they will feel the justified pride of seeing themselves in print.
A word about the contributions which appear: The time honoured privilege of editors of liberally using blue pencils and scissors has not been used. This may appear unbelievable to the casual reader, but nonetheless it is a fact. The contributions see the light of day as they were presented to the editorial board. This alone will surely prove that Campion School possesses budding writers of great future promise.
A tribute of thanks is due to the self-constituted editorial board with Master Dominic Moraces as Chairman, Master Pratap Dundh as Secretary and Master David Joseph as Councilor. They went about begging and coaxing and pleading until they got what they wanted. Without their persistence the Magazine would still be in the realm of possibilities. Our thanks are also due to the Teaching Staff for their ready cooperation at all times. And finally a special vote of thanks must go to Mr. Talyarkhan for an article which is so full of wise counsel. What kind of beguiling influence Master Moraes used to get this article will forever remain a mystery.
Lastly let all Campionites value this first issue of their Magazine and promise that it will not be the last