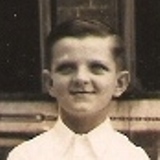 Robin Hood was the captain of a band of merry men. Next came little John. He was called Little John because he was so tall just as Midge the miller’s son was called Much because he was so short. Robin Hood felt tired because he had nothing to do, so when the winter was over he went out to find adventure. When he came to a narrow bridge and he wanted to cross it he saw another man coming from the other side, so he said, “Stand back till I cross” “Not I” replied the stranger. So Robin took out his bow and said “If you don’t I’ll send an arrow through your heart” The man who was Little John said “You’re a coward for I have only a stick.” Robin cut himself a stave from some thick bushes and advanced to fight the giant. They both hit and battered each other till Robin gave John a mighty hit on the chest. John roared “I give what I take” and so saying gathered all his brawn into one mighty blow, which sent Robin head first into the river. John pulled Robin out of the water and they shook hands and parted the best of friends.