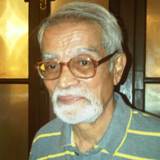 One cold night in September the moon was shining brightly. There was a soft splashing of oars and a long faint shadow was thrown on the water. The light house was not shining as usual. Many ships had been wrecked on the rocks and anybody who had been there had not returned.
The only people who had escaped was a thin pale and sick man the old light house keeper and his two cheerful children. He was once happy but he was now poor and homeless. Some burly smugglers had entered the light house through a secret passage while the family were sleeping seized them and put them into a boat with many oaths. The boat reached the shore. They went to the nearest village about three miles away but the villagers were afraid to render assistance as they did not know the number of rouges. So the old man returned to fnd out accompanied by John and Peter. As the father was busy exploring the rocks to discover the secret passage by which the ruffians had entered the light house the two sons slipped away to another point in the shore. Suddenly they heard some noises; so they hid behind a gigantic rock. Unexpectedly the rock moved and the boys saw stairs leading down to a dark passage. After they entered and had descended the flight of stairs they saw some huge boxes. They tried to lift them but filed. All of a sudden they heard voices. So they made a dash behind the boxes. Then they spied two burly scamps approaching. They were smartly dressed.  One of them growled “I thought I heard something move.” “Don’t be silly” was the reply. “Everybody” said the first “thinks the light house is hunted” ”That’s lucky for us” said the second “since there are only four of us” Then they opened a box with a key and took out bottles of whisky. Filling their glasses they clinked them and drank till they got drunk. While they were reeling about the children snatched the keys of the boxes and slipped away.
Their joy was great and they greeted their father warmly and related their adventure. Then they went to town with the news. A party of ten sturdy villagers came along and John and Peter led them to the passage where after a fierce struggle the smugglers were over powered. The children were rewarded and the light house shone once more