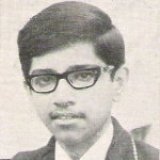 It was a fine morning, with a nip in the air, first day of November 1963. The classes had assembled as usual, and as usual the lessons were in full swing.  Little did we guess that it would be a very sad day for Campion and all the Campionites.  There was nothing to presage what would happened before the morning wore out.  And it really came down like a bolt from the blues.

We were busily taking down notes which our master was dictating, when I happened to look out of the window and up in to the skies, perhaps one of those instinctive glances just to let the eyes rest for a sec.  But that glance showed me black, thick smoke, plenty of it gushing upwards, the dreaded symptoms of a fire.  I told my neighbour and soon all of us were looking in that direction.  But it never occurred to us that the fire could be so close to us, just one block away from our school. Even as we were looking the intensity and blackness of the smoke increased and went on increasing visibly.  The frantic bells and screeching tyres of the fire brigade told us that we were too close to the fire for comfort.

There was confusion for a moment, just for a moment.  The master got the class under control, and we were ordered to collect our books, to step out of the class orderly and proceeded downstairs in ranks.  The other classes and masters had done much the much the same as we did and though all the time downstairs we all were under an oppressive air of alarm, as the breeze.  Blew the smoke towards our building, yet there was no stampede.  But efficiently in a few minutes the whole of Wellesley Building was vacated. Once down our curiosity would have made us rash to the place and see the fire.  But things were under absolute control and were concentrated along the pavement far away.  Though the principal was absent those days, Rev.  Fr.  Molina aided by some masters, managed to get some extra buses from the BEST an within half an hour all the students had been evacuated to their respective homes and told not to come that afternoon.  It was a magnificent achievement of efficiency.

While we were passing by the other side of the cooperage we could see the mounting flames and the fire-men trying their level best and to fight against the lack of water pressure to keep the fire under control. Well, we children rather enjoyed it, for we somehow and unexpectedly had some fun and a half-day off.  Yet a tragedy was being enacted right at that very moment. We came to know about it the next day, when the papers gave the news, and we were shocked.  For Fr.  Cortes, though he had not been long in Campion, had become a darling to us all.  Did we appreciate his untiring efforts to guide us on the right path! His charitable nature had been responsible for his death.  He just rushed inside the building as soon as the fire started, trying to save any residents who might be caught within.  How he died is a mystery that admits only of surmise.  But die he did heroically, a hero of charity.  I am sure Fr.  Cortes was never sorry that his young life and career had been cut short by his act of charity… he was like that! His memory lingers on fresh even today, and I am sure that it will remain so for all of us who were at School that day, and for those who saw his remains the next day at the funeral.

If a man can do such things for the love of his God and of his neighbour, then his God must be a mighty one, and I am certain God has rewarded Fr.  Cortes as he deserves.