A Naval Exercise With The Navy 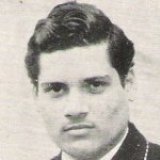 The thirteenth of November found us on a floating jetty off Lion’s Gate, eagerly awaiting the arrival of motor-boat to take us to I.N.S. BETWA, a new frigate of the Indian Navy.  The boat arrived and in we stepped, and while we were still far off we could already distinguish the brass lettering on the noble, lean hull, freshly painted a whitish grey.
Well, soon the ten of us – all of us Sea Scouts – climbed up the side ladder and landed directly on the main deck.  A smiling and friendly sailor was put in charge of our group.  Right from the start it was made evident to us that we were not just on a mere pleasure cruise, but we had to work.  Five of us were sent immediately to help bringing up the motor boat to its support.
The occasion was a joint exercise of all the ships in the harbour of the Indian Navy, and the families of Officers and men, plus a few privileged guests, like ourselves Sea Scouts Camion, were invited.  By 9.30 the ships began leaving the stream one by one, in their prearranged order and at the mathematical fixed distance.  The ship very courteously were saluting each other as they passed.  Once our own ship was in motion we,  the ten of us,  were assembled on the lower deck at a ‘stand-at-ease’ position,  and as we passed each ship we were ordered to ‘come alert’.  Soon BETWA took the lead and we surged forward.  There were five other ships taking part in the exercise.
Soon the water changed from a muddy grey to a bright translucent green.  The majestic Mysore came alongside us, and both the ships kept up a constant speed.  A line was thrown across and a group of sailors were transported, one by one, from one ship to the other, by a swivel standing rope.  The sailors were doing a demonstration to the civilians of the simplicity and safety of the operation.  Now, a few courageous civilians were also transported, but they were sitting on a suspended basket-chair. Only one of us Scouts was fortunate enough to go through the experience, as there was time marked for everything.
By noon the formation, with our Betwa on the lead, was resumed and the ships stopped or nearly so, waiting for the firing exercise.  Ours was the leading ship in the firing, too.  It shot out two rockets, and that was the signal to the other ships, for they began firing Jong range anti-aircraft shells …aiming at Betwa’s rockets.  The aim was extremely good and most of the shells came within inches of the flare-rockets.  The next exercise was a show of depth-charges, squids and mortar bombs.  Our ship specialised in squids, while the Mysore was blasting mortar bombs and other were throwing the depth-charges.  It was a ‘martial’ treat to witness these last once explode, or rather the effects of their explosions.  A black drum-like shell was shot out of our ship far ahead of our prow.  As it landed on the water (or should I say ‘in’ the water/) a minor wave shot out on either side of the anti-submarine charge.  The thing sunk and shortly afterwards a gigantic mushroom of water, white and foamy, shot out and up into the air.  As we slowly passed over the spot where the explosion had taken place the air was heavy with the cordite, or whatever the explosive was, stinking smoke and a fine brown spray.  Then came a very welcome exercise, in which every one participated in his own how bracing the sea breezes are…and we – that’s all, guests and crew, felt ravenous.  But in the Navy they are quick and we did not waste much time after lunch.  The exercises were soon resumed.  Now it had to be salvoes of surface shells, mostly fired from the Mysore.  Already her six-inch turrets were moving into firing position, the starboard side, and the firing began..  Three coloured shells were fired and a few miles away we could see, even with the naked eye, three mushrooms of three different colours, red, blue and yellow.  Two more rounds were fired.
We were given also a demonstration of signaling, plus other minor and less noisy shows of life and activity on board a warhip.  But naturally, most of those things, even we Sea Scouts do them and they were not so exciting.  Anyway, tea-time came and down we went once more.  This time we did delay, for the exercises were over and it had been some time now that we were slowly heading for the harbour.  I happened to glance through a port-hole and saw that the colour of the water had changed once again, the other way about as from the morning, which told me that we had entered the stream of our harbour.
By six p.m. we were landing at Lion’s Gate, after an experience of a few hours seeing for ourselves what the men of our Navy had to go through in peace time in order to be trained and ready for the dreaded war time… should it come.  God forbid!