As I See It 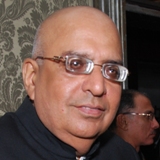 I recollect having joined Campion in 1959 and graduating from it in 1967. There were about 30 students in a class which meant that individual attention was a reality. My heart goes out to the present set of students who have to cope with burdensome syllabi and packed classrooms, not to mention the bane of a student life – unwieldy home works. Fr. More is synonymous with Campion and his sincerity and love for the boys knows no equal. It is not uncommon to have him play along with us and the news of his transfer came like a bolt from the blue. Of the old guard of masters two are unforgettable for their unique personality, Mr. Arthur Menezes and Mr. Alex Correa
25 years ago being a Campionite was a passport to any college. Today Campion has geared itself to prepare young men to meet the challenges of the world. So intense is my love for Campion that I enrolled myself as a member of the Old Campionites Association (OCA) and served as its Secretary (3years) Vice President (3 Years) and was co-opted as Jt. Secretary (3 Years)
That Campion has its own Computer Laboratory indicates that we are making progress. It should be used properly as a tool for the future. It amazes me to watch Campion’s Computer Whiz kids’ mastery over the computer
One aspect however clearly stands out and that is Campion’s failure to produce a breed of good sportsmen. I am of the opinion that this is because undue emphasis has been placed on the academic part of school rather than a balanced approach.