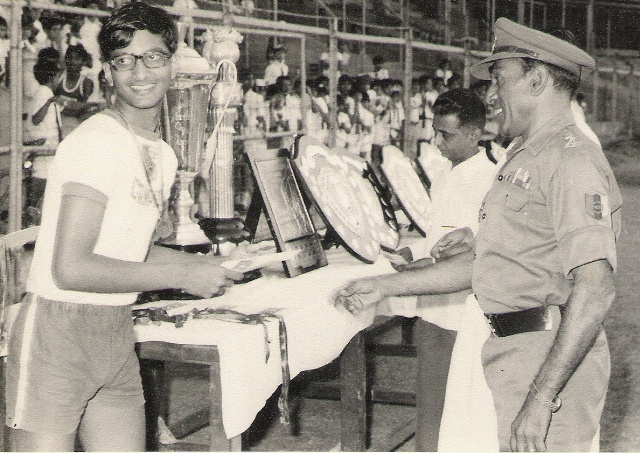 - Atul Kasbekar
When in Std VIII B

It was the day of the 30th Annual Athletic Meet that Campionites went to on the 21st of January at the C.C.I. Take my honest word for it that it was just as exciting as the previous 29th. The games started with the traditional, high-classes Inter-House March-past, after which the chief guest declared the meet open. The track events began after the promise as the field events had been complete-ted during the heats. Great enthusiasm surged through the hearts of the crowd of spectators composed of boys, was run in the highest spirit of sportsmanship. The narrow margin that Britto had gained during the field events was held almost throughout the meet. The senior section showed a distinct lack of enthusiasm and spirit as it drew the least number of entries. Shripal Manilal won the championship after Samar Mehta had breathed down his back in every race. The Intermediates’ section attracted many entries but it was Craig Vernem all the way as he ran through the opposition in almost every race. The long distance champion of Campion School, Murad Talib performed a rare double by winning both the 1500 and the 3000 m. events. The juniors had the stiffest competition in every event. Ronald Borges topped in field events and was among the first three in all his tracks races. This enabled him to win the championship after Rajat Kumar and young Sanjay Gadhvi caused many raised eye-brows in the stands. The Sub-Juniors’ champion-ship was also very closely contested and finally won by Neil Fernandes.
The Midgets championship was taken by a promising youngster called Suraj Mody who literally vanquished any opposition that was put forward. The Mini Midgets group where the Kiddies are scared to cross the finish line was taken by Aditya Mukerjee who walked over the rest. The Physical display this time consisted of dumbbell exercises that were breathtakingly disciplined and brought many cheers from the stands. The chief guest was Lt Col. Frank Doulton who took the salute for both the opening and closing ceremony. The chief guest was introduced by Mr. Joe Sheth after which was the prize distribution. The million dollar question in everybody’s mind was who would take the lead in the March Past and Physical Display. After much consultation and perspiration the final verdict was announced XAVIERHOUSE had wan both!!! This tipped the balance and Xavier House came from behind to win the meet by the narrow margin of one point. The final scores were Britto 164 Xavier 165 Loyola 156. The day reflected many types of faces. Some in ecstasy and joy as their memories still raced back to the main events. Some expressed anguish and grief as they remembered their mistakes. But my face certainly told everyone that it was one of the best days in the History of Campion School.