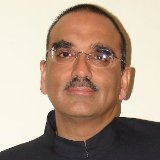 Diplomas: Obtained a Diploma in Public Speaking from the Indo-American Society in June 1977. In June 1978 passed the Government Commercial Diploma examination in First Class and secured first rank in the state .

University Degree: Awarded the Bachelor of Commerce Degree from the Bombay University in May 1982 and was placed in First Class.

Qualified as a Chartered Accountant in July 1984. Admitted as an Associate member of the Institute of Chartered Accountants of India in  1984 and as a Fellow member of the Institute in 1990. Completed in 1994 at the Hongkong University a Masters  Degree course in Public Administration. Admitted in 1999 as a Certified Fraud Examiner by the Association of Certified Fraud Examiners, Texas, USA. Admitted as an International Affiliate of the Hongkong Institute of Certified Public Accountants in September 2005.

Gained experience in taxation, company law matters, accounts and audit of banks and private sector industries during the three years of articles in Bombay, India. Worked with Ernst & Whinney, Certified Public Accountants, in Hong Kong (presently known as Ernst & Young) in their audit and investigation departments during the period 1984 to 1986. Since September 1986, I have been employed the Independent Commission Against Corruption (ICAC) which is a law enforcement agency in Hong Kong. I currently hold the rank of Chief   Investigator in the Operations Department. My job responsibilities have included:
Investigation of complex corruption related commercial frauds
Analysis and interpretation of financial data
Giving opinions and evidence in the Courts of Hong Kong; having been accepted as an expert
Fund and asset tracing
Interviewing suspects and witnesses involved in financial crime
Assisting investigators in the search and seizure of  documentary evidence
Intelligence gathering and participation in undercover assignments  relating to counterfeit currency, credit cards and computer software and hardware
Performing management audits and inspection services
Delivering lectures on Commercial fraud related topics including Money laundering and Asset tracing in the Operations Department Training School.
Member of the Board of Directors and Chairman of the Credit Committee of the ICAC Credit Union.

Commissioner’s commendation received in September 1994, for displaying outstanding ability and devotion to duty of an exceptionally high order during the Stock Exchange of Hongkong enquiry which resulted in the conviction of its Chairman .

Directorate Commendation received in April 1997, for detective ability in an undercover operation which eventually led to the conviction of four persons for counterfeiting US currency.

Directorate Commendation received in August 1997 for professional ability, tenacity and devotion to duty of a very high order during the course of a complex and protracted corruption, smuggling and tax evasion enquiry which included the murder of a witness.

Attended in UK, the 1994 an International Conference on Mutual Legal Assistance conducted by the Commonwealth Secretariat, UNIDCP and UNICRI at Oxford University.
Attended in April 1999 a FBI conducted specialised course on White Collar Crime at the International Law Enforcement Academy, Bangkok, Thailand.

Attended in July 2001, the National Undercover Training and Assessment Course conducted by the Metropolitan Police in United Kingdom

Attended in October 2001 and November 2003, the Asia Pacific Group Money Laundering Methods and typologies workshop in Singapore and Kuala Lumpur and addressed their plenary sessions.

Attended the Mastercard conference on e- commerce and on line fraud at Macau in November 2004.

Attended in April 2005, the US DOJ conference on proceeds from counterfeiting crimes and delivered a key note address.

Attended the OECD/ADB seminar on Mutual Legal assistance and extradition in Kuala Lumpur in March 2006 and Bali in Sept 2007.

Represented Hongkong at the FATF project group meetings on corruption related money laundering, held in Paris in January and May 2006.

Passed in 2002, the Qualifying examination conducted by the Association of Cricket Umpires and Scorers (UK) and have been regularly umpiring weekend cricket league games in Hongkong. Have also umpired the U-17 Asia Cup matches, Tuanku Jaffar and Hongkong International Sixes tournaments in India/Thailand, Singapore and Hongkong respectively. Admitted by ACU&S (UK) as a qualified umpire in May 2005 and was awarded the Umpire of the year award in 2005 and 2006 by the Hongkong Cricket Association.

Was appointed as match referee for the Hongkong International sixes in 2006 and for the Asian Cricket Council (ACC) Women’s tournament in Johor Baru in 2007.

Appeared for the ACC Central Course Examination in Kuala Lumpur in December 2005 and stood first from amongst 36 candidates from 18 countries.

Nominated by the ACC to attend the International Cricket Council Seminar in Dubai in March 2006.

Appeared for the Level II ACC examination in conjunction with Cricket Australia in August 2006, in Kuala Lumpur, and was accredited as a Level II umpire.

Member of the Match and Disciplinary Committee of the Hongkong Cricket Association between 2006 and 2009.

National selector for Ladies U-19 Hongkong cricket team in 2008 and Chairman of Selectors for the Men’s national team since 2009.