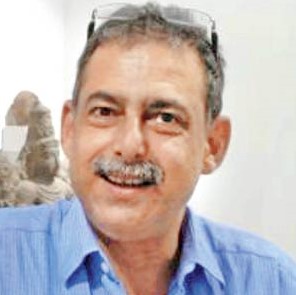 Established as one of India’s earliest art galleries in May 1963, Pundole Art Gallery has been promoting modern and contemporary Indian art through important exhibitions, retrospectives, publications and art education for over four decades now. Founded by Kali Pundole in the vibrant post-independence era, the gallery is one of the most reputed and recognized in India today.

M.F. Husain, undoubtedly India’s most celebrated painter today, has been associated with Pundole Art Gallery since 1964 when he and Mr. Pundole struck up an extraordinary friendship. Ever since, the gallery has had numerous important shows by the artist including Ghashiram Kotwal, Imprints of the Chola, Sufi, Portrait of an Umbrella, and 88 Oils.

V.S. Gaitonde (1924 – 2001), a solitary figure, was influenced by ancient calligraphy and Zen philosophy. Unlike the prolific Husain, Gaitonde produced very few finished works in his lifetime, preferring a slow and meticulous painting process. Considered one of modern India’s master abstractionists, Gaitonde’s works have fetched over US$1 million at Sotheby’s and Christie’s auctions in New York and London.

Works by other eminent Indian artists represented by the gallery such as Ram Kumar, Akbar Padamsee, F.N. Souza and Krishen Khanna have been exhibited all over the world at such prestigious venues as the Venice, Sao Paolo and Tokyo Biennales, Oxford University Museum, Rockefeller collection, Museum of Modern Art (MoMA), Royal Academy of Arts, London, Tate Modern, and Guggenheim Foundation, New York.

In 1980, Mr. Pundole’s son, Dadiba Pundole joined the gallery. Over the years he has expanded the gallery’s artist base to keep pace with the contemporary art scene in representing the next generation of artists including Jogen Chowdhury, Laxma Goud, Laxman Shreshtha, Prabhakar Kolte, Sakti Burman and Badri Narayan.

The Pundole Art Gallery has been frequented by artists and art collectors, public figures and prominent businessmen. Works by artists represented at the gallery have been placed in important private and museum collections worldwide. The gallery has built tremendous good-will with clients and artists alike over the years and remains one of India’s foremost galleries today.

Dadiba Pundole was a senior consultant to the international auction house, Sotheby’s (est.1744), Modern and Contemporary Indian Art from 2005 to 2010.

He was also appointed to the Advisory and Purchase Committee of the National Gallery of Modern Art (NGMA), Mumbai from 1998 to 2002.

Mr. Pundole has curated the exhibition Image Beyond Image, from the Indian art collection of the Glenbarra Art museum, Japan. The show travelled to    five cities across India in 1997.

Mr. Pundole was invited to be on the Sesquicentennial Celebrations Art Committee of the Sir. Jamsetjee Jejeebhoy Institution, India’s leading art school.

Dadiba Pundole has been senior art consultant to various prominent corporate houses in India and abroad.