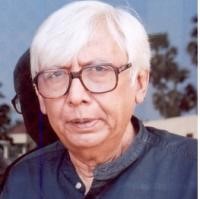 Dominic Francis Moraes popularly known as Dom Moraes was born in Mumbai, then Bombay, in 1938 to Beryl and Frank Moraes. His father was the journalist and writer, who became the first Indian editor of The Times of India after independence. Doms’ childhood was exceptionally rich in experience, since he followed his father on his journeys through South-east Asia, Sri Lanka, Australia and New Zealand. That childhood was also shadowed by the dissensions between his parents, and the gradual descent of his mother into a mental illness that would culminate with her confinement to a care institution. Poetry announced its claim on Dom very early. His first poems were written at the age of 12, and came in a stream when he went up to Oxford.

At home, Nissim Ezekiel gave him bracing advice on tone and direction; in Britain, which would soon become more of a home than India, W.H. Auden offered him praise and Stephen Spender published his poems in Encounter. The Parton Press in London brought out Dom’s first book of poems. He was 19, and the book bore the appropriately workmanlike title, A Beginning. It won him the Hawthornden Prize for the "best work of the imagination" in 1958, and Dom remains the first non-British winner of this prestigious award, as well as its youngest recipient.Mr. Moraes became established as a serious poet with his third volume, John Nobody (1960) and followed this with a chapbook, Beldam & Others (1967). He then passed into a phase of poetic silence, during which he felt the energies of mystery and lyric had deserted him; he could not shape thought and image into verse, although he remained haunted by the memorable characters he had created, the sinister gardener, the innocent prince, the wizard trapped in glass, the innocent sinner, the self-mortifying saint.

In these years of exile from poetry, Dom edited magazines in London, Hong Kong and New York, covered the first mass-media trial (that of the Nazi death-camp commandant Adolf Eichmann in Jerusalem) and several wars, spending time in Israel and Vietnam and working for the United Nations. During the 1980s, Dom returned to the city of his birth, and gradually, the poetic impulse returned. Even while he kept up an astonishingly prolific output as a columnist for the daily newspapers, he wrote accomplished poems that were all sharper for his prolonged dormancy. These have since been brought together in his Collected Poems (1987), while his more recent poems have appeared as Typed with One Finger. Throughout his life, Mr. Moraes was alternately attracted and repelled by India, its people, its culture: this tension afforded him one of the most vital impulses of his art, the others being a sense of abiding loss, a search for redemptive love, and a feeling of being permanently in exile, no matter where he went.

By a strange paradox, Dom traveled far more widely in the jungles, deserts and backwoods of India, in the course of his varied career as a journalist, writer of travel prose and director of documentary films, than many of the critics who attacked him for what they saw as his Westernized contempt for Indian customs and his colonial attitude of aloofness from local realities. Mr. Moraes never quite overcame his repugnance at the regressive features of Indic culture, the bigotry and violence of the sub-continent's social formation. Towards the end, even as he regarded the rise of majoritarian intolerance with horror and thought the country's future bleak, he achieved a certain compassionate equanimity towards its people, a positive sense of identification with their struggles and aspirations. In a reciprocal gesture, the literary culture that had long rejected him, to the extent of excluding him from anthologies of Indian literature, recognized him with awards, and more importantly, with a revival of serious attention in his writing The Long Strider is the title that Mr. Moraes gave to their book on the 17th-Century English traveler and mystic, Thomas Coryate, who visited the court of the Emperor Jehangir and died in Surat.

Considering the distance that Dom Moraes covered, from his early position of self-declared alienation from India, and his intricate negotiations with the conditions of home and elsewhere, self and the other, this would serve as a fitting description of his own life. Dom Moraes was a poet who nurtured his gift despite the workaday demands of prose, who fought his inner demons and gave a candid account of these encounters, and who distilled these struggles into haunting phrases and compelling images. His candor, just as much as his brilliance, will ensure that he is remembered by generations of readers of poetry. He published over 30 books. He edited magazines in London, Hong Kong and New York. He became the editor of The Asia Magazine in 1971.

Awards and recognitions
* Hawthornden Prize for the best work of the imagination, 1958, for the book of poems A Beginning
* Autumn Choice of the Poetry Book Society for Poems (1960)
He scripted and partially directed over 20 television documentaries for the BBC and ITV. He was a war correspondent in Algeria, Israel and Vietnam. In 1976 he joined the United Nations. Moraes conducted one of the first interviews of the Dalai Lama after the Tibetan spiritual leader fled to India in 1959. The Dalai Lama was then 23 and Moraes was 20.

He had been suffering from cancer for several years, passed away at his home in Mumbai on June 02 204. Having refused to submit to the rigors of diet and treatment demanded by his affliction, Mr. Moraes decided, in the words of Dylan Thomas, a poet with whom he shared a love for the archetypal myth and the richly arcane word, that he would "not go gentle into that good night."Instead, with the sentence of extinction hanging over him, he traveled widely across India, a country that was both intimately familiar and forbiddingly strange to him, and producing several books with his companion on these geographical journeys that were also expeditions into a complex self.

The celebrated poet, Dom Moraes, married the Indian actress Leela Naidu and then separated from her.