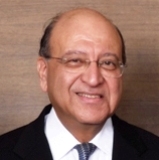 Farrokh Kavarana, a director of Tata Sons and Tata Industries, is the chairman of Tata AIG Life Insurance and Tata AIG General Insurance, Tata Asset Management (The Tata Mutual Fund), Tata Projects, and Trent. He is also a director of several other Tata Group companies such as Tata Tea and Titan Industries, as well as Tata and non-Tata companies overseas.

Mr Kavarana started his Tata Group career in 1975 as director of Tata Industries and managing director of Tata International AG / Tata AG in Switzerland, and soon thereafter of Tata Limited, London, with the responsibility for overseeing the Group's investments and activities overseas. In 1994 he was appointed executive director of Tata Motors, and in 2000 he became executive chairman of Tata Infotech until its merger with TCS in 2005.

Prior to joining the Tata Group, between 1970 and 1974, Mr Kavarana was with McKinsey & Co Inc in London and Washington DC, and advised leading international financial institutions in the UK, Europe, Middle East and N America including the World Bank. In 1974-75, he was a director of the European subsidiaries of The Bowater Corporation.

Mr Kavarana received a B Com (Hons) degree from the University of Bombay and an MBA from the Wharton School, University of Pennsylvania. He is a Fellow of the Institute of Chartered Accountants in England and Wales.

He is a trustee of the Childline India Foundation, the National Centre for the Performing Arts (NCPA), the Nani A Palkhivala Memorial Trust and the Lady Tata Memorial Trust. He is a recipient of the Dadabhai Naoroji Millennium Award 2005.