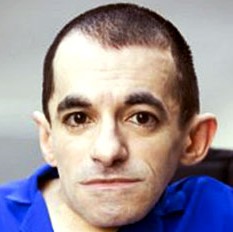 Firdaus Kanga was born into a middle-class Mumbai family in 1960. His semi-autobiographical novel Trying to Grow (1994) was turned into the award-winning film Sixth Happiness (d. Waris Hussein, 1997) for which he not only wrote the screenplay but also played the lead role.He has presented a number of documentaries on the themes of disability, such as Double the Trouble, Twice the Fun (d. Pratibha Parmar, 1992), a provocative documentary drama that explored sex between gay men and lesbians who have disabilities. The film was broadcast on 15 July 1992 as part of Channel Four's lesbian and gay series Out (1991-94). He is a writer who lives in London. He has written a novel, Trying to Grow and a travel book Heaven on Wheels about his experiences in the United Kingdom. Trying to Grow was later turned into a film, Sixth Happiness, for which Kanga wrote the screenplay, and in which he appeared. He was born with brittle bone disease, and Trying to Grow is autobiographical. Kanga was born in Mumbai the westernized Parsi community, and his writing centre on dealing with disability and sexuality.

Sixth Happiness is about Brit - a boy born with brittle bones who never grows taller than four feet. It is also about the Parsi or Parsees - descendants of the Persian empire who were driven out of Persia by an Islamic invasion more than a thousand years ago and settled in western India. Parsees had a close relationship with the British during the years of the Raj. Brit is named by his mother, both after his brittle bones, and in tribute to his mother's love of Britain. The depiction of Brit's parents as ardent Anglophiles with fond memories of the Raj and WW2, presents a glimpse of a non-stereotypical Indian family. This, along with the story of a young disabled man's sexual awakening as family life crumbles around him makes Sixth Happiness an interesting exploration of modern, urban India. Kanga's creation - both as writer and performer - resists drawing the main star Brit as either martyr or victim. Brit is bright, spiky, opinionated and selfish with a razor-sharp wit. He prefers the Kama Sutra to Shakespeare and does not allow gender or disability to come in the way of his desire for sex and love.
Firdaus Kanga has presented documentaries, such as Double the Trouble, Twice the Fun (d. Pratibha Parmar, 1992), a provocative documentary drama that explored sexuality and disability. The film was broadcast as part of Channel Four's lesbian and gay series Out. Taboo, another documentary presented by Kanga, explored religion and disability - for instance, the Hindu notions of karma - exploring how religion can exclude and patronise people of disability.

Firdaus Kanga was born with osteogenesis imperfecta, a condition also known as brittle bones disease. This left him with several painful fractures throughout his childhood and adolescence in India. He grew up in a family of five, in a one bedroom Bombay apartment. He spoke out against the Indian socialist consensus, and was a supporter of Reagan and Thatcher politics. Kanga's first major achievement was Trying to Grow (also translated into French [Grandir] and Italian) a novel exploring disability, sexuality and culture. In India where religion still dictates most cultural acts, Kanga's novel broke several taboos - portraying disabled people with healthy, rich sexual appetites. Kanga publicly rejected Hindu notions of karma (laying responsibility for suffering at what humans may have done in their last birth) often foisted on disabled people. Kanga was one of the first few public figures in India who stood up for the views of gay people, celebrating sexuality, in a society that still criminalizes, though hardly, if ever, prosecutes homosexuality.

Kanga was selected to be part of The Vintage Book of Indian Writing: 1947-97 - a major anthology of the work of the most important and influential Indian writers of the last 50 years. This volume was published by Salman Rushdie and Elizabeth West to coincide with the anniversary of India's independence.