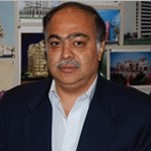 Mr. Hiten R Mahimtura, exstudent of Campion School is a 46 year old Director of Mahimtura Consultants Pvt Ltd at Fort Mumbai. He was a brilliant student of the Campion School from 1968 to 1976. Soon after his Schooling he pursued his Engineering Degree from Manipal institute Technology, and passed out with distinction in 1984. In addition he also did his MS civil from Michigan University, with another distinction in 1985. Hiten also possesses additional qualification such as MIL, MACI, and MASCE from USA.

From the professional front Hiten has done courses in FORTRAN 1V, Basic, Word process, data base programs and spreadsheet, knowledge of computer aided drafting. He has also done PERT / CPM and programs relating with Microtrak (USA) with Finite Element Analysis.

Before joining as Director of Mahimtura Consultants Pvt Ltd in 1985, he was associated with R L Nene Consulting Engineers, as Junior Engineer.

As a Director of MCPL he has been associated with several projects of varied nature in Mumbai and all over India. Under his leadership the company has executed designs of numerous residential towers, commercial and industrial structures and special structures like sea walls, roads and bridges. he has been of great asset in the field of designing, project management site co-ordination, quality control, dealing with clients, i.e. Hiranandani, Runwal, Hafeez Contractor, Reliance and Raheja and so on. The company has grown many folds under his able leadership and with the help of his team of 500 experts in the field of civil engineering.

Board Member of the Campionites Association of Campion School.

Associate membership of the Institutional of Engineering (India)

Ranked eighth in University board examination for B.E.Civil - 1984.