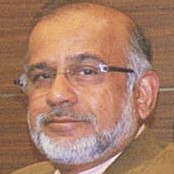 Diamond never loses its shine. It remains bright and spreads an aura of brilliance around it. A quality reflected in the Chairman & Managing Director of Biostadt India Ltd. - Juzar Saifuddin Khorakiwala.

Mr. Juzar Khorakiwala believes to lead by example with his roster of achievements that include being the Recipient of the prestigious "TRIPLE-A” Award for Management for the year 1991-92 from the Asian Institute of Management, Manila, Philippines. This Award was presented at a special ceremony held in Jakarta, Indonesia.

Down the years, he has built a rock-solid reputation of trust and faith amongst his peers and customers alike. The illustrious examples below throw light on his foresight and profit-churning ability along his journey as an Executive Director of Wockhardt Limited to currently, being the Chairman & Managing Director of Biostadt India Limited.

He laid the foundation of the 'Biostadt agrisciences' (as it was called earlier) in the year 1987 with the launch of its first factory at Aurangabad. The Division secured its first International order under his able guidance in 1995. He established a wholly owned subsidiary in Philippines in 1997.

His vision saw the company test fresh waters with the launch of Aqua Division. Further he sowed the seeds for future growth with entry into seeds business through the launch of Hi-Q Seeds.

He enjoys the reputation of an all-rounder who not only shines in his professional life but has other facets which highlight different sides of his personality. He is been an avid tennis player for the past 40 yrs. And Apart from being the Chairman and Managing Director of Biostadt India Ltd., he was also the President of Rotary Club of Bombay Central (2002 - 2003) involved in various social work issues. President of Asian Institute of Management Alumni Association (India) since 1990 - 97, Chairman of Life Science & Biotechnology Committee for 2001 - 02 of Indian Merchants' Chamber Managing Committee, VICE CHAIRMAN of the International Trade Committee of the Indian Merchants’ Chamber, VICE PRESIDENT of the Indo-Canadian Business Council and Vice President of Bombay Gymkhana for the year 2007 - 2008 are some other industry positions that he has held.

In addition to above he was Executive Committee Member of the Indian Drug Manufacturers Association (IDMA), an Apex body of the National Pharmaceutical Industry in India. Member of Bombay Management Association (BMA), Indian Institute of Materials Management (IIMM), Member of Governing Body of Allana College of Pharmacy.

Mr. Juzar Khorakiwala sincerely believes that 'where there is a will, there is a way', a theory which acknowledges his impressive achievements by far.