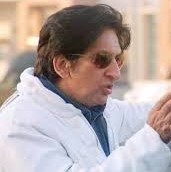 The rock star who turned filmmaker

My full name, according to my horoscope, is Kailashnath Surendranath Astir Sharma. After completing a law degree, my father came from Lahore to Mumbai for a holiday. Quite by accident, he joined the movies as an actor and singer (the concept of playback singing wasn’t that known then). He was launched as Bombay's answer to K.L. Saigal and went on to become the legendary 'Surendra'. His billing on film posters was – Surendranath B.A. L.L.b., because he was the only highly educated individual from the film industry at the time. He decided to start his dynasty with his first name rather than surname and so registered all of us kids in school, etc., as Surendranath.

After an early childhood, in a series of predominantly girl schools, since I have elder sisters, I came into my own at Campion, which was an all-boys school. Here, I had a brilliant and illustrious academic career in Science and Maths subjects and was consistently amongst the toppers. Thereafter, I went to IIT Kharagpur for exactly one day (which was scary for me)! Then, I decided to enjoy my teenage years in St. Xavier’s College. I graduated in Physics and Maths, but definitely not with flying colours, like in school.

My first day in college was very memorable. I was young and under the delusion that I was some sort of a rock star. I wore my hair long, was heavily influenced by the Rolling Stones and the Beatles and all the music of that time. Apparently, the principal, Father D'cruz, looked out of his office window, saw me, thought I was rather unruly and asked me to go home and come back the next day with haircuts. I was especially ordered to tuck my shirt in. But, that was just the first day. What followed was a wave of fashion; minis and what not!

The architecture of the college is amazingly beautiful, built colonially and out of stone; it is one of the jewels of this city. I loved it then with all its dark corners, stairways and chapels, etc. I love it now too.

There was the wonderful quadrangle and, of course, the canteen. Outside, there were very interesting places, each of which had their phases of popularity. There was 'Venice' in the Astoria Hotel at Churchgate, where all the bands played and the kids hung out during college hours, there was disco in the Taj, ‘The blow Up' at night, the ‘Slip Disc’ for hard rock and heavy metal and ‘Samovar’ at Jehangir Art Gallery for meeting up at lunch. All of us in colleges in South Bombay seemed to have, at that time, one unified tribal consciousness; everybody knew each other and went to the same places and unlike what I see today it was one community. This brings to mind the lyrics of a Beatles song....'there are places I remember all my life though some have changed.... '

My specialisation… music, girls, partying, wandering and also Physics and Maths! The problem is, after finishing school and then playing in a band (called the Bad Boys) during the longish vacation before college started, the sheer abandon of life and sense of freedom got to me.

Then, there was the guru I met when I was 17, who is now known as Osho, who proposed that 'life is a cosmic dance... a celebration'! So, I rarely attended college, and my illustrious academic career went down the drain. It was a great time of rock and roll and, though I did manage to graduate with my inherent knowledge and intelligence and my fondness for Science and Maths, it was the crazy party phase in my life. My friend circle was absolutely amazing! Truly, the eclectic mix that this city is made up of.

Our fun comprised of movies, outings, etc. Playing in a band when you are that age is truly unmatched 'fun’. I was into sports like swimming, tennis, badminton and table tennis and I still play these games. Life was a haze of nightclubs, sports clubs, wandering and the college canteen. All this lasted till the first year in college. Then, I started working or rather making films alongside and that was a lot of fun for me too. When I was just 17, a major advertising agency, Lintas, entrusted me to produce and direct a commercial, which was the very first for Liril soap, and is still considered one of the most path-breaking in Indian advertising. There was no looking back from there.

Today, I am a filmmaker, a producer, director, often writer, teacher, poet and musician too and my very own investment banker. I feel blessed, but also very lucky. I became a success in spite of throwing away my education. My advice to all the kids is to really think about what you want to do in life, what you love to do, and what you really love to learn. Do not join college without a plan or at least a semblance of a plan. Otherwise, it can very easily become a waste of time, as you may not get that lucky.