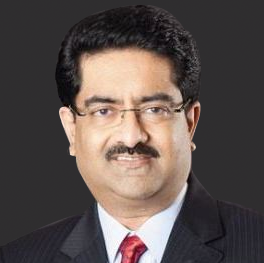 Chairman of the Aditya Birla Group

Mr. Birla took over as Chairman of the Group in 1995, at the age of 28, after the untimely demise of his father. As Chairman, Mr. Birla has taken the Aditya Birla Group to an altogether higher growth trajectory. In the 20 years that he has been at the helm of the Group, he has accelerated growth, built a meritocracy and enhanced stakeholder value.

In the process he has raised the Group’s turnover from US $2 billion in 1995, to US $41 billion today. Mr. Birla has restructured the businesses to emerge as a global/national leader in the sectors in which the Group operates. He has made 36 acquisitions in 19 years in India and globally, the highest by an Indian multinational in India.

The acquisition of Novelis, a global metals major, in 2007, the second largest acquisition ever by an Indian company, led to a new found respect for Indian companies and stoked a higher level of interest in the country as well. The subsequent acquisition of Columbian Chemicals, a US-based company and the world’s third largest carbon black manufacturer positioned the Group as the No. 1 player in this sector, given its own sizeable carbon black operations today. Likewise, the acquisition of Domsjö Fabriker, a leading Swedish speciality pulp manufacturer enables the Group’s Pulp and Fibre business to further consolidate its global position.

Besides these, over the years Mr. Birla has acquired manufacturing plants in Canada, China, Indonesia and mines in Australia, and set up new plants in Egypt, Thailand and China. Alongside, he has expanded capacities in all of the Group’s manufacturing units.

In India as well, he has made major acquisitions, the most notable being the Cement division of Larsen & Toubro, Jaypee Cement (MP & Gujarat), Indal from Alcan, Madura Garments from Coats Viyella, the Chlor Alkali division of Kanoria Chemicals and Solaris Chemtech Industries.

Under his stewardship, the Aditya Birla Group enjoys a position of leadership in all the major sectors in which it operates. Over the years, Mr. Birla has built a highly successful meritocratic organisation, anchored by an extraordinary force of 120,000 employees belonging to 42 different nationalities. The Aditya Birla Group has been ranked fourth in the world and first in Asia Pacific in the ‘Top Companies for Leaders’ study 2011, conducted by Aon Hewitt, Fortune Magazine and RBL (a strategic HR and leadership advisory firm). The Group has topped Nielsen's Corporate Image Monitor 2014-15 and emerged as the Number 1 corporate, the 'Best in Class', for the third successive year.
In key responsible positions on various regulatory bodies

Mr. Birla holds several key positions on various regulatory and professional Boards. He was a Director on the Central Board of Directors of the Reserve Bank of India. He was Chairman of the Advisory Committee constituted by the Ministry of Company Affairs and also served on The Prime Minister of India’s Advisory Council on Trade and Industry.

He is on the National Council of the Confederation of Indian Industry and the Apex Advisory Council of the Associated Chambers of Commerce and Industry of India.
On the board of educational institutions

Mr. Birla is deeply engaged with educational institutions. He is the Chancellor of the renowned Birla Institute of Technology & Science (BITS) with campuses in Pilani, Goa, Hyderabad and Dubai.

Mr. Birla is the Chairman of IIT, Delhi.

He is a Director of the G. D. Birla Medical Research & Education Foundation.

Mr. Birla is the Chairman of Rhodes India Scholarship Committee.
Accolades conferred on Mr. Birla
Mr. Birla has won recognition for his exemplary contribution to leadership processes and institution/systems building. A selective list:

International Advertising Association’s (IAA) “CEO of the Year Award 2016”
Inducted as an Honorary Member – Rotary Club of Mumbai (November 2014)
Hello Hall of Fame – Business Leader of the Year 2014 (November 2014)
US India Business Council (USIBC) “2014 Global Leadership Award”
“Business Leader of the Year”, the Economic Times Awards for Corporate Excellence, 2012-13
‘Ranked the 4th Most Powerful CEO (2013)’ in the Economic Times’ Corporate India’s Definitive Power listing of 100 CEOs
Indore Management Association’s Award ‘National Indian Business Icon’, 2013
Forbes India Leadership Award – Flagship Award “Entrepreneur of the Year, 2012”
NDTV Profit Business Leadership Awards 2012 - “Most Inspiring Leader”
The Degree of Doctor of Science (Honoris Causa) in recognition of his role in “pioneering great Engineering products involving Multi-disciplinary Engineering thought processes in the Country” by the Visvesvaraya Technological University, Karnataka, 2012
NASSCOM’s ‘Global Business Leader Award’ 2012
CNBC-TV18 India Business Leader Award 2012 for “Taking India Abroad”
“GQ Business Leader of the Year Award - 2011” from Condé Nast India Pvt. Ltd., an affiliate of Condé Nast Global
“CNN-IBN Indian of the Year 2010 – Business”, “for being the most outstanding business person and making a success out of most businesses including the sunrise sector”, 2010
The All India Management Association’s (AIMA), Managing India Awards “Business Leader of the Year”, 2010
The AIMA – “JRD Tata Corporate Leadership Award”, 2008
The Honorary Degree of Doctor of Science (Honoris Causa) in “recognition of his invaluable contribution in the field of Business Administration” by the G. D. Pant University of Agriculture & Technology, 2008
“For the development of technology and also for the involvement in the field of Industries in bringing the country at par with other countries in the field of Industries”, the SRM University in Tamil Nadu conferred the Degree of Doctor of Literature, 2008
The “Asia Pacific Global HR Excellence – Exemplary Leader” Award, 2007
“The Global Indian Leader of the Year” by NDTV Profit in their Business Leader Awards category, 2007
The Lakshmipat Singhania – IIM, Lucknow “National Leadership Award, Business Leader”, 2006
Represented India at the Ernst & Young World Entrepreneur Award in Monte Carlo, Monaco in June 2006, where he was inducted as a “Member of the Ernst & Young World Entrepreneur of the Year Academy”
“The Ernst & Young Entrepreneur of the Year” Award, 2005
“Young Super Performer in the CEO Category” by Business Today, 2005
Chosen by the World Economic Forum (Davos) as one of the “Young Global Leaders”, 2004
“The D. Litt (Honoris Causa) Degree” by The Banaras Hindu University, 2004
“Honorary Fellowship” by the All India Management Association, 2004
“The Business Leader of the Year”, The Economic Times Awards for Corporate Excellence, 2002-2003
“Business Man of the Year-2003” by Business India
The Rajiv Gandhi Award for “Business Excellence and his contribution to the country” by the Mumbai Pradesh Youth Congress, 2001
The National HRD Network, “The Outstanding Business Man of the Year”, 2001
The Institute of Directors’ “Golden Peacock National Award for Business Leadership”, 2001
Hindustan Times, “The Businessman of the Year”, 2001
The Bombay Management Association – “The Management Man of the Year 1999-2000”
“Among the 10 Super Stars of Corporate Finance” – Global Finance, 1998
“Among the top 10 of India’s most admired and respected CEOs and the top CEO of the coming millennium”, Business World, 1998

Beyond business: Reaching out to the marginalised sections of the society

A firm practitioner of the trusteeship concept, Mr. Birla has institutionalised the concept of caring and giving at the Aditya Birla Group. With his mandate, the Group is involved in meaningful welfare driven activities that distinctively impact the quality of life of weaker sections of society, surrounding hundreds of villages that are among the poorest in India, Thailand, Indonesia, Philippines and Egypt.

In India, the Aditya Birla Group is engaged in 5,000 villages, reaching out to 7.5 million people annually and making a difference to their lives through meticulously conceived projects focusing on health care, education, sustainable livelihood, infrastructure and social causes. For instance, the Group runs 42 schools which provide quality education to 45,000 children. Of these, over 18,000 children receive free education. Additionally, over a 100,000 youngsters benefit from bridge educational programmes and vocational training. Its 18 hospitals tend to more than a million villagers. In line with its commitment to sustainable development, the Group has partnered with the Columbia University in establishing the Columbia Global Centre’s Earth Institute in Mumbai. To embed CSR as a way of life in organisations, the company has set up the FICCI – Aditya Birla CSR Centre for Excellence in Delhi.
Educational background

A commerce graduate from Mumbai University, Mr. Birla is a Chartered Accountant. He earned an MBA from the London Business School.
Personal details