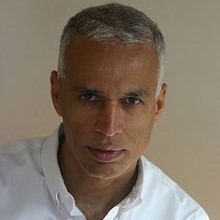 Manil Suri (born July 1959) is an Indian-American mathematician and writer, most notable for his first and so far only novel, The Death of Vishnu.

Suri was born in Mumbai, India, which was then known as Bombay. He attended the University of Bombay before moving to the United States, where he attended Carnegie Mellon University. He received a PHD in mathematics in 1983, and became a mathematics professor at the University of Maryland Baltimore County. He still continues to hold this job even though he is more notable as a writer, and has risen through the academic ranks of the university. Suri began writing short stories in the 1980s during his spare time, but few were published. In 1995 he began writing The Death of Vishnu, a novel about social and religious tensions in India taking place in an apartment building in contemporary Mumbai. The novel was published in 2001, and became an international bestseller. According to an interview on the audio book version of the novel, Suri is planning to write two more novels, The Birth of Rama and The Life of Shiva. His work contains many allusions to Indian cinema and Hindu mythology.

Suri's mathematics research is in the numerical analysis of partial differential equations.

1996 ``The approximation of boundary layers in the hp version of the finite element method,'' Christos Xenophontos

1992 ``The effect of quadrature error in the p version of the finite element method,'' Chang G. Kim.

1992-95 ``Hierarchical Modeling and Locking Effects in the Numerical Analysis of Multistructures.'' AFOSR

1989-92 ``Numerical Treatment of Differential and Integral Equations by the p and hp Versions of the Finite Element Method''. AFOSR

1985-88 ``Analysis of the Performance of Mixed Finite Element Methods'', AFOSR

Society for Industrial and Applied Mathematics