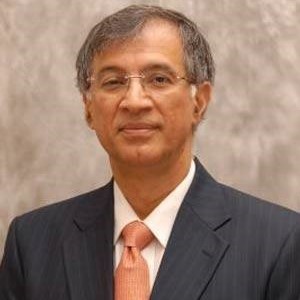 Niranjan Hiranandani is the Managing Director of the Hiranandani Group of Companies. The Group is today considered as a producer of best quality housing and commercial premises in the country. Apart from construction, the group has diversified into education, horticulture, hospitality, entertainment and retail.

Mr. Niranjan is the son of eminent ENT Surgeon and Padma Bhushan recipient Dr. L.H. Hiranandani, an icon in the field of medicine. From his early beginnings of teaching chartered accountancy, Mr. Niranjan began his initial business by venturing into textiles with a weaving unit at Charkop in Kandivali in 1981. His first spark of recognition in the construction line came with their work in Versova, Andheri in the mid-eighties.

The transformation of a barren land in Powai from a lonely hillside quarry with about 20 trees to one that is bustling with activity, with over 200 acres of greenery, as well as top-of-the-line commercial, residential, recreational and educational facilities is something we all cherish.

Since then, the Hiranandani Group has come a long way to be recognized countrywide for their modern and state-of-the-art mix-user township projects in Powai and Thane, both of which have become preferred residential and commercial locations in and around Mumbai. They call him Builder Extraordinaire and the man responsible for changing the skyline of Mumbai.

Leadership, brilliance, untiring zest for excellence and down-to-earth are words that come to mind when one comes face-to-face with Mr. Niranjan. The phrase ‘labore et constantia’ (with consistent efforts, one can scale great heights) sums up his success story.

Mr. Niranjan Hiranandani completed his schooling from Campion School, Mumbai and graduated with a Bachelor of Commerce Degree (Hons.) from Sydenham College with a distinction of standing Second in Mumbai University. Adding to his professional qualification, he completed his F.C.A. from the Institute of Chartered Accountants of India.

Mr. Niranjan is actively associated with and holds key positions in various Government Bodies, Private and Social Institutions, Schools and Colleges. Continuing to serve the society in the best possible manner, the Group has forayed into the Healthcare sector with the 137 bedded Dr. L. H. Hiranandani Multi Specialty Hospitals at Powai and Thane. He calls it his “Building of Passion”.

Some of his past achievements include drafting the State Policy for Slum Rehabilitation in Mumbai designed to improve the wellbeing of over 6 million slum inhabitants; acting as a trustee for the creation of Nathdwara Township as a heritage destination; serving on the board of the Housing and Urban Development Corporation (HUDCO), an organization which distributes US$3 billion per annum to help fund the building of housing for low income families; acting as an adviser to the Government of India on housing and habitat policy for over a decade; and serving as Chairman of Housing Committee of the Federation of Indian Chambers of Commerce and Industry (FICCI).

The Hiranandani Group has gone international with 23 Marina – a 395m high 90 storied neo-lifestyle residential tower coming up in the upscale Marina region of Dubai. Due for completion in 2009, 23 Marina is tipped to be the world’s second tallest residential tower.

Mr. Niranjan Hiranandani is a Business Leader combining qualities business acumen, forthright citizen, industry leadership and above all giving value to his Customers. Today, the Hiranandani Brand is synonymous to Quality, Timely Completion of Projects, and Total Township Development.

•    Board of Trustee – Nathdwara Temple Board, Nathdwara (Rajasthan).

•    Past President of Hyderabad (Sind) National Collegiate Board, which manages 22 educational institutions including secondary and higher secondary school, polytechnics, degree and post-graduate colleges.

•    Past President of the Maharashtra Chambers of Housing Industry (MCHI), an association of Builders and Developers.

•    Chairman of the Real Estate Committee of Federation of Indian Chambers of Commerce & Industry (FICCI).

•    Past Member of Task Force for reforms in Housing & Urban Development of Government of India.

•    Past Member of the Study Group on Slum Rehabilitation Scheme, Government of Maharashtra.

•    Past Convener of the Key Group representing Business Community in the United Nations Conference on Human Settlements (HABITAT II).

•    Past Member of the Working Group on the Urban Housing for the Ninth Five Year Plan.

•    Chairman of Mumbai Committee of the Ford Foundation in collaboration with Vera Institute of Justice. To initiate Police–Private Industry Collaboration and specific projects to improve professionalism of the Police Service in India.