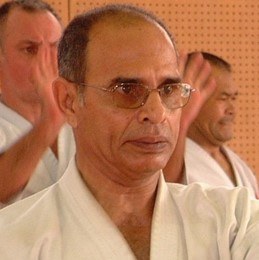 Founder of Karate in India

Pervez Mistry, known to many as the Founder of karate in India, was born in Mumbai in the year 1945. When the world still believed that the martial arts were cradled in Japan, it was Pervez who traced the roots of karate back to India and was charged with the consummate passion of bringing back the art and form of karate-do to its original home – back to India.

Pervez Mistry was initiated to Judo at the age of 13 years. After four years of strenuous training under Mr. Kowanko, 6 th Dan, he qualified for his 1 st Dan, Judo in India. Eager to propagate the art, he started his own class with two students at his residence. In early 1968, Pervez secured a scholarship to go to the All Japan Judo Federation, Seibukan, Kyoto Japan for further training in the martial arts. Training under Sensei Masafumi Suzuki, 9 th dan of the Goju Ryu karate-do, he distinguished himself in Judo and qualified himself for 2 nd Dan. Pervez  was also initiated in karate and after rigorous training under Sensei Suzuki, qualified for 1 st Dan karate. His sterling performance at the Hon Dojo earned him the approval to open a Seibukan Branch in Mumbai.

This was the birth of the AMA Seibukan, India in August 1969 founded by Shihan Pervez B. Mistry. Thus from humble beginnings with home classes, the set-up grew into a body known as the Academy of Martial Arts. The AMA strengthened its relations with many social institutions by giving demonstrations to promote martial arts and the Indo Japanese Association granted a life membership to the AMA. Over the years, Pervez worked towards increasing the interest in karate in the minds of the youth and under his guidance and sterling leadership, the AMA opened several branch dojos. While AMA spread its wings, Pervez  Mistry continued to achieve laurels both for himself as well as the institution he had founded and in 1975, he successfully attained the International Referee and Judges Certification at Los Angeles. In 1977, the AMA achieved special recognition on both national and international fronts. The same year,  Pervez returned from a three month intensive training from Japan achieving the honour of 3 rd Degree Black Belt as well as the Official Instructor's Certificate from the World Union Karate-do Organization. Having had the opportunity of being personally trained under Shihan Morio Higaonna, he was granted Chief Instructorship for IOGKF-India.

Pervez’s extensive knowledge and experience in karate backed by continuous training earned him the coveted certification from the World Union of Karate-do Organization Official Referees and Judges Clinic and was selected to referee and judge at the World Tournament. He was also elected on the Asian Referees Council. Pervez  strove not only to promote karate, but also implant its virtues in the minds of the young children and in 1984, for the first time, started karate classes for children. Pervez  was invited to Headquarters Okinawa, of the IOGKF to participate in the preparatory training for the International Gasshaku. Shortly thereafter, he was awarded the Yon Dan (Fourth Degree Black Belt) in the presence of the Grand Master's family.

Mistry's achievements are varied and extensive. In 1984, he was the first Indian karateka to be awarded a WUKO 4 th Dan. The strife for excellence continued for Pervez who was awarded 6 th Dan, the highest ranking in the country and in 1990, he was invited by the United Nations for training their security personnel based in Vienna, which was a real honour bestowed upon Mistry. In 1994 Pervez was felicitated by Fit India Movement of the Rotary Club for promoting physical fitness and karate. In 1998, Pervez went to Okinawa as an invitee to take part in the 110 th Chogun Miyagi Festival and Master's Seminar where 53 countries were participating. Over the years, Pervez  trained several karatekas. His consummate passion for karate made him work endlessly towards the cause of promotion and spread of the sport. What began as a trickle, now continues to flow with the passion of its founder member. The opening of numerous dojos across the length and breadth of the country, the prestige bestowed upon him and the accolades won by his students in innumerable competitions both national and international bringing laurels not only for themselves, but also for the institution as well as the country stand testimony to his zealous work towards the understanding and spread of karate in India.