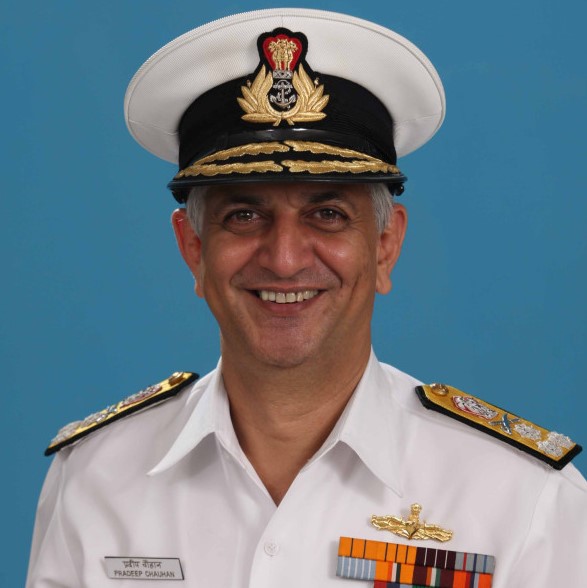 We are happy to state ExCampionite Pradeep (Billoo) Chauhan Class of '69 – Britto has been promoted as to the three-Star rank of Vice Admiral of the Indian Navy. In his own words he says “I am delighted to be able to inform you that (thanks largely to the excellent foundation provided way back in Campion) I have been able to surmount the many hurdles of a life in the Armed Forces of India and was promoted to the three-Star rank of Vice Admiral (Army/Air Force equivalents are Lieutenant-General/Air Vice Marshal) on 17 February, 2009.

A second generation Naval Officer (his father, a Marine Engineer, retired from the Indian Navy as a Commodore),   Admiral Pradeep Chauhan (or ‘Billoo’ Chauhan, as he is commonly known) is proud to be a true-blood, blue-blood Campionite, having passed out with the ISC Batch of 1969 (Class XI-A : Science) — with a First Division. He joined St Xaviers College, for a magical spell of a little over a year (‘Inter’) indulging in the liberal arts, before setting off — in June of 1971 — to join the National Defence Academy (NDA), Khadakvasla, Pune for his three years in this very prestigious tri-Service ‘cradle for leadership’.

He underwent his early naval training aboard INS Delhi and INS TIR, emerging as Best Cadet and first in the order of merit as a Midshipman and was commissioned into the Executive Branch of the Indian Navy, on 01 Jul 75. After obtaining his ‘Bridge Watch-keeping Certificate’ aboard INS Himgiri, followed by stints aboard INS Nirbhik and INS Amba, Pradeep was selected for the Long Navigation-Direction Course and graduated, at the head of his course, in 1981. After successful tenures as a specialist ‘Navigation, Direction and Operations’ officer aboard IN Ships Talwar and Himgiri, he was appointed on the instructional staff of the ‘Navigation & Direction School’ at Kochi, Kerala.

During this tenure, he went as apart of the ‘Fourth Indian Scientific Expedition to Antarctica’, as the ‘Expedition Navigator’ as well as the ‘South Pole Probe Team’ navigator. In 1986, he was deputed to Mauritius, as the Commanding Officer of MNS Amar. While in Mauritius, he was privileged to conceive-of and to set-up the ‘Mauritius National Coast Guard’ and to thereafter, be its first Commandant.

Upon his return from this three-year deputation to Mauritius, he was select-listed for Commander and, in 1989-90, underwent the 45th Staff Course at the DSSC, Wellington and was awarded an MSc (Def Studies) from the Madras University, in the ‘First Class with Distinction’. This was followed by three professionally rewarding years at Naval Headquarters as the ‘Commander, War Room’, in the ‘Directorate of Naval Operations’. In 1993, he assumed command of the Missile Corvette, INS Khanjar, which was, under his leadership, adjudged the ‘best ship’ of the Eastern Fleet. He was, thereafter, appointed on the faculty of the ‘Defence Services Staff College’ (DSSC) at Wellington (a verdant hill-station in Tamil Nadu) and, in Jan 95, upon his promotion to the rank of Captain, was appointed as the Head of the Training Team (Navy). In 1996, he was honoured by the award of a ‘Vishisht Seva Medal’ for distinguished service of an exceptional order. He then shifted to Mumbai, where he served as the Captain Work-up (West) — an organization functioning under the ‘Flag Officer Sea Training’ that ensures and certifies our warships as being professionally-fit to join the Fleet. During this tenure, he underwent the 9th Naval Higher Command Course (NHCC) at the College of Naval Warfare (CNW), Karanja. This was followed by his assumption of the directorship of the prestigious ‘Indian Naval Tactical Evaluation Group’ (INTEG), and, of the Maritime Warfare Centre (MWC), Mumbai. In December 1999, he was chosen to commission the Indian Navy’s latest multipurpose frigate, INS Brahmaputra, and held that command until December 2001, when he was promoted to the rank of Commodore and selected to undergo the 42nd Strategic Studies Course at the National Defence College at New Delhi. Having graduated from the NDC, he did his second tour of duty at Naval Headquarters (newly re-named the ‘Integrated Headquarters of the Ministry of Defence [Navy]’ or ‘IHQ/MoD (N)’ for short) this time as the Principal Director, Directorate of Naval Operations. This was followed by a successful and enriching 18-month experience in command of the aircraft carrier INS Viraat, the very top-most of the Indian Navy’s sea-going commands.

Promoted to Flag rank on 01 September 2005 and assumed his present appointment as the Assistant Chief of the Naval Staff (FCI) (Foreign Co-operation and Intelligence) on that date.

Pradeep Chauhan retains his fondness for aquatics (he has been an NDA ‘Blue’ in swimming and in water-polo) and is considering taking-up the formidable challenge of golf. He enjoys reading and dabbles at writing from time-to-time. He is happily married to Nisha, having remained in a state of marital bliss for the last 30 years. They have a daughter, Karishma, who hopes to become a marine biologist.

For the immediate present, Pradeep continues in his present position and remains in charge of Foreign Cooperation and Intelligence (also handling Strategic Concepts and, of all things, the Media --- thereby ensuring a permanent schizophrenic state of mind!!!).”