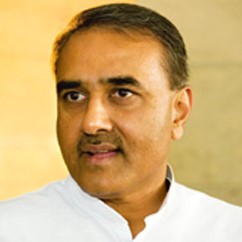 Praful Manoharbhai Patel (born in Kolkata, India on 17 February 1957) is an Indian politician and businessman. His father, Manoharbhai Patel, was an Indian National Congress leader and had been elected to represent Gondia district in Maharashtra. Patel graduated with a Bachelor of Commerce degree from the University of Bombay and married Varsha Patel, a Gujarati businessman's daughter. His political career began in 1991 and he was appointed as the Civil Aviation Minister in 2004. His family runs the CeeJay group, a large tobacco conglomerate in India.

He has been the president of India's association football governing body the All India Football Federation (AIFF) since 2012.

All India Football Federation President, Praful Patel became the Asian Football Confederation’s vice president of the SAFF region at the AFC Congress held in Bahrain in 2015.

In 2004, Patel was appointed Minister of Civil Aviation. Within months of taking charge, Patel convinced the government to hike the foreign direct investment cap in the domestic airlines sector from 40% to 49%. He also stressed the importance of the aviation sector's cargo carriers and their importance to the Indian economy. In 2004, India had 125 aircraft; however, after Patel became Minister of Civil Aviation the number increased to 400. On 18 January 2011, he was relived as Civil Aviation Minister and appointed as the Union Cabinet Minister of Heavy Industries and Public Enterprise in the same month. Patel has been under the cloud of suspicion for presiding over not just the unjustifiable merger of Air India and Indian airlines, but also the reduction in routes of Air India. The leak of the Radia tapes speak of him stripping the airline and awarding all Air India's profitable routes to Middle east airlines.

On 9 January 2013, Patel launched the National Electric Mobility Mission Plan (NEMMP) 2020, which is a roadmap for the progressive introduction and expansion of efficient and environmentally friendly electric and hybrid vehicles in the country. In July 2013, Patel launched The Indian Electrical Equipment Industry Mission Plan (IEEIMP) 2022 with the specific intention of ensuring that Indian manufacturers are able not only to fulfill India's requirements, but also to be major exporters of electrical equipment. Two important areas – the Auto Sector Skill Development Council and the Capital Goods Sector Skill Council - were also promoted. Apart from promoting electric and hybrid vehicles, Patel also aimed to create a green, clean and environmentally friendly corridor.

As the Minister of the Heavy Industries, Patel launched a project to build the world's largest solar power plant near Sambhar Lake in Rajasthan. The project will generate roughly 4000 MW of power which will almost quadruple India's solar power capacity.

In addition, Patel was an integral part of the exchange of MOU for collaborative MBA and other courses between three Indian academic institutes and the International Centre for Promotion of Enterprises, Slovenia. The government regularly nominates government officers and public sector executives to attend the courses and programmes conducted by ICPE.

Patel inaugurated the Auto Hub in Nagpur, when the unit was in its initial stages. This is a centrally located city like Nagpur, from where cargo could be distributed all over the country faster because of its network of road, rail and air connections, which could also be developed into a hub for automobile sector. The land in the Butibori Industrial area is also well connected by road, rail and air network. Concessions and subsidy by state government will decide what materialises here.

The biggest turnaround was when India won the rights to host the FIFA Under 17 world Cup. This event spelt a change in fortune for India's football federation. New life was injected into the sport, which further ensured equal geographical distribution of football in India through the Grassroots Programme.

Patel has also placed a bid from India to host the FIFA World Club Championships. After the bidding session, Patel stated that he felt confident about India's chances of winning the rights to host the event.

On 14 February 2014, the All India Football Federation (AIFF) was named the best national sports federation.

In addition, Patel also looks over the proceedings at Gondia Education Society, which educated more than one lakh students in several disciplines including law, engineering and the arts. His father, Manoharbhai Patel, laid the foundation of this educational institution in 1958.

Since 2012, Patel has been the President of the All India Football Federation (AIFF).Patel received the honour of being the uncontested Vice President of Asian Football Confederation (AFC) of the SAFF Region on 30 April 2015. The announcement was made at the AFC Congress held in Bahrain. According to him, Indian football is going through a transition and the developmental activities of the sport are finally getting noticed. He further said, "This is a huge responsibility. I would not only be representing my own Country but the entire SAFF Region. I stay confident of receiving support from all stakeholders for rapid progress of football in the region."

As per the AIFF President Patel, “It is quite a privilege to step into an agreement with the French Football Federation”. The AIFF President has emphasized upon the intake of technical knowledge from the French counterpart. The general secretary of AIFF Kushal Das also graced the occasion.

As per the correspondence which has been signed, the two federations have taken the decision to support each other in terms of the mutual growth, promotion and continuous emphasis on the development of football in both the countries.

The exchange of officials and management, referees, coaches, technical experts and organizational activities were also recommended. Various other imperative aspects like sports centers and training camps were also discussed upon. Apart from this, the AIFF President also hinted upon a concrete preparation plan before the U-17 World Cup to be played in India. A number of preparatory matches in France with the active participation of the youth team have also been planned.

AIFF President Praful Patel was congratulated by the AFC President Shaikh Salman bin Ebrahim Al Khalifa for the overall progress of Indian football and for the launch of the women’s league.

On June 3, 2015, AIFF President Praful Patel signed a Memorandum of Understanding (MOU) with FFF to seek technical expertise as well as exposure trips for the Indian U-17 football team.

On April 20, 2016, in accordance with the signed MOU, AIFF President Praful Patel together with François Richier (Ambassador of France to India), and Denis Scheaffer (FC Metz Director) announced that three Indian Under-19 national team players, Anirudh Thapa, Prosenjit Chakraborty and Jerry Lalrinzuala, will be sent to France to train with a French Club Side FC Metz.

On March 28, 2016 AIFF President Praful Patel announced the commencement of a women’s league later in 2016.

In 2005, Patel was awarded the CAPA (Centre for Asia Pacific Aviation) Aviation Minister of the year. The award was in recognition of Patel's contributions towards the progress of aviation in the Asia Pacific region.
In 2006, India Today ranked Praful Patel as the no. 1 minister.

In addition, Patel was bestowed with the title of 'Reformer of the Year' by The Economic Times in 2007.

Patel has also been awarded an honorary doctorate by Leeds Metropolitan University for his contribution in making India a rapidly developing and economically strong nation in 2007. For instance, the Civil Aviation sector grew exponentially under his leadership from the year 2004–09.
Participation in Cultural and Social activities

Patel is Chairman of the Manoharbhai Patel Charitable Trust and President of the Gondia Education Society, Gondia, Maharashtra. This society manages more than 1,000,000 students who are studying in schools and colleges that come under it. The Manoharbhai Patel Charitable Trust holds regular aid and equipment distribution programs in Gondia and Bhandara to improve the lives of the physically challenged.

Association with Sports and Clubs