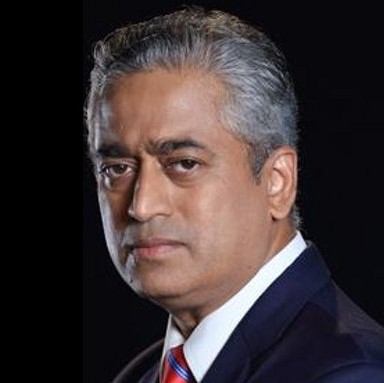 PADMA SHRI Rajdeep Sardesai (born 24 May 1965) is an Indian news anchor and author. Sardesai is currently a consulting editor at the India Today group and will be doing a marquee show for Headlines Today. He was the Editor-in-Chief of IBN18 Network, that includes CNN-IBN, IBN7 and IBN-Lokmat from where he left in July 2014.

He is married to journalist and author Sagarika Ghose.

The son of the Indian Test cricketer Dilip Sardesai, he completed his schooling up to ICSE from the Campion School in Mumbai, did two years of ISC from The Cathedral & John Connon School, Mumbai, and completed a bachelor's course in Economics from St. Xavier's College. He then went to University College, Oxford, getting the degrees of Bachelor of Arts, Master of Arts, and Bachelor of Civil Law. While at Oxford he made six first-class cricket appearances for Oxford University and one for a combined Oxford and Cambridge side against the 1987 Pakistani touring team. He was awarded a cricket Blue.

Rajdeep Sardesai has worked with The Times of India for six years and was the city editor of its Mumbai edition. He entered television journalism in 1994 as Political Editor of New Delhi Television (NDTV). He was the Managing Editor of both NDTV 24X7 and NDTV India and was responsible for overseeing the news policy for both the channels. He hosted popular show like 'The Big Fight' at NDTV. He later quit NDTV to start his own company, Global Broadcast News (GBN), in collaboration with the American giant CNN and Raghav Bahl's TV18. The latter broadcasts the Indian Edition of CNBC called CNBC-TV18, the Hindi consumer channel, CNBC Awaaz and an international channel, SAW. The new channel with Sardesai as the Editor-in-Chief has been named CNN-IBN. It went on air on 17 December 2005. Channel 7 has also come under this umbrella after Sardesai's company bought a 46 percent stake in the channel. Channel 7 has since been renamed IBN7. He has also been the President of the Editors Guild of India, the only television journalist to hold the post and was chosen a Global leader for tomorrow by the world economic forum in 2000.

During the total career, he has covered major national and international stories, specializing in national politics. He has contributed to several books and writes a fortnightly column that appears in several newspapers.

On 29 May 2014, Reliance Industries Ltd announced it would be acquiring control in Network 18 Media & Investments Ltd, the parent of CNN-IBN,IBN7 and CNBC-TV18. The board of RIL approved funding of up to ₹40 billion (US$590 million) to Independent Media Trust (IMT), of which RIL is the sole beneficiary, for acquisition of control in Network 18 and its subsidiaries.

Rajdeep, along with the entire founding team – editorial and managerial- resigned from the Network18 group. Rajdeep, editor-in-chief of CNN IBN, wrote in a letter to the employees before his resignation, "Editorial independence and integrity have been articles of faith in 26 years in journalism and maybe I am too old now to change!".

He has won numerous other awards for journalistic excellence. Those includes:

The prestigious Padma Shri for Journalism in 2008

The Asian Television award for talk show presentation and has been News Anchor of the year at the Indian Television Academy for eight of the last nine years.

He has been the President of the Editors Guild of India and was also chosen as a Global Leader for Tomorrow by the world economic forum.

After resigning from the CNN-IBN group which happened almost immediately after the 2014 Loksabha elections, Sardesai authored a book 2014: The Election that Changed India which was released on 1 November 2014.
Sardesai co-authored the chapter The Truth Hurts: Gujarat and the Role of the Media in the book Gujarat:The making of a tragedy, which was edited by Siddharth Varadarajan and published by Penguin (ISBN 978-0143029014). The book is about the 2002 Gujarat riots.