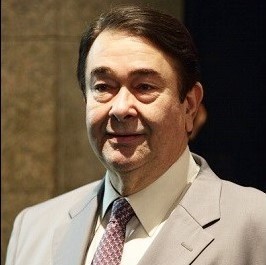 Randhir Kapoor (born 15 February 1947) is a Bollywood actor, producer and director. He married the actress Babita, with whom he had two daughters, actresses Karisma and Kareena Kapoor.

Kapoor was born on 15 February 1947 in Chembur, Bombay, Bombay Presidency, India (now Mumbai, Maharashtra, India) to Punjabi parents. He is an alumnus of Colonel Brown Cambridge School, Dehradun. He belongs to the famous Kapoor family who have been part of the Hindi film industry since the late 1920s.[2][3] He is the eldest son of Raj Kapoor and one of the grandsons of actor and producer Prithviraj Kapoor. His wife is actress Babita and his daughters are actresses Karisma Kapoor and Kareena Kapoor.
Career

Randhir first appeared as a child artist in Shree 420 (1955) and Do Ustad(1959).He became assistant director with the film Jhuk Gaya Aasman starring Rajendra Kumar in 1968. Randhir Kapoor made his acting and directorial debut with Kal Aaj Aur Kal (1971) which also starred his wife, father and grandfather. The film, produced under the R.K banner, was an average success.[4]

After his debut, he acted in three consecutive hit films, all released in 1972: Jeet, Raampur Ka Lakshman and Jawani Diwani.[5] Jawani Deewani was one of the biggest hits of that year. 'Raampur Ka Lakshman',[5] costarred Shatrughan Sinha and Rekha, and was directed by Manmohan Desai, with music by R.D. Burman. After which remake of MGR’s hit 1971 film Rickshawkaran was made in Hindi in 1973 with Randhir as the lead hero opposite new heroine Neetu Singh but the film flopped though its music was popular. In 1974 he had 2 big hits – Hamrahi and the 2 hero film Haath Ki Safai as hits but Dil Diwana failed to be a hit at the box-office, in spite of its music being better than its predecessor Jawani Deewani. In 1975, two of his films, Lafange and Ponga Pandit, were hits, but his other two movies, Dafa 302 and Dharam Karam, were box-office failures. From 1976 till 1981, Randhir had solo hero hit films like - Khalifa, Aaj Ka Mahaatma, Bhanwar, Ram Bharose, Dhongee and his multi-star films like Chacha Bhatija (1977), Kasme Vaade (1978) (he earned a Filmfare nomination as Best Supporting Actor), Mama Bhanja, Heeralal Pannalal, Dhyanu Bhagat also known as Bhakti Mein Shakti, Chor Ke Ghar Chor, Biwi-O-Biwi: The Fun-Film were hits too. After the failure of the 1981 Harjaee, he got few offers to star or co-star in films. His film Nikkamma, begun in 1976, was finally released in 1983 as Jaan-e-Jaan, was also a dud. He starred in Sawaal and Pukar in 1983, and received critical praise for his performance, but they flopped nonetheless. In the same year, Humse Na Jeeta Koi received average collections.

In 1991, he directed and produced the blockbuster Henna (1991), that starred his younger brother, Rishi Kapoor and Pakistani actress Zeba Bakhtiar. Henna resulted in a trip to Pakistan, where he was treated royally by then-president Nawaz Sharif, a fan of his father Raj and his uncles Shammi and Shashi. He was nominated for the Filmfare award for Best Director. In 1996 he produced PremGranth, the directorial debut of his younger brother Rajiv, and in 1999 produced Aa Ab Laut Chalen, the directorial debut of his brother Rishi.

In 1999 he played a guest appearance in the film Mother alongside Rekha and Jeetendra and Rakesh Roshan. After another break he appeared in the film Armaan (2003). On 13 May 2007 he made an appearance on the television chat show Koffee with Karan with his brothers and sister Rima and his sister-in-law Neetu Singh appeared. On the show, it was mentioned how Randhir had been Neetu's first leading man in the film Rikshawala (1972), which was not a success.

In 2010 he returned to films with roles in Housefull and Action Replayy. In 2012 he appeared in the multi-starrer Housefull 2, the first film in which he acts along with his brother Rishi.
Personal life

Randhir married actress Babita on 6 November 1971 when he was just 24 after co-starring with her in Kal Aaj Aur Kal, as the couple fell in love during the shooting of this film.[6][7] Their two daughters, Karisma Kapoor, born in June 1974, and Kareena Kapoor, born in September 1980, are Indian film actresses. The couple separated in 1988 as differences arose between the couple as Randhir's acting career slumped after 1983 and Babita wanted her daughter Karishma to be an actress. Babita left Randhir with her daughters. Although against his daughters becoming involved in acting, he eventually came around the idea and is supportive of their careers. The two reconciled in October 2007, having never divorced but lived separately for 19 years.[8]
Filmography