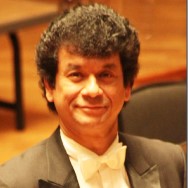 Highly regarded for his musical diversity, Ricardo de Mello is a violinist who stands in a league of his own. The Indian born violinist has performed over 10,000 engagements, many of them for leading world dignitaries and celebrities. Acclaimed by NRI magazine as “a stylistic violinist gifted with technical perfection,” Ricardo has established himself among Hong Kong's most distinguished artists for the past two decades.

In 1982, Ricardo's passion for performing light classical, romantic, and Gypsy music inspired him to form his own ensemble, the Ricardo de Mello Quintet (formerly known as the Melody Quintet.) Heralded by South China Morning Post as “some of Hong Kong’s finest ambassadors”, the Quintet has become Hong Kong's most popular instrumental ensemble. They have been invited as featured artists to perform for Hong Kong's most prominent private and social events, from grand openings to high profile weddings. They have performed at the city's most prestigious venues, including world conferences, convention centers, luxury hotels and restaurants, and private clubs. Over the years, Ricardo and his quintet have been featured in several television broadcasts.

A favourite of Hong Kong's elite, Ricardo has been invited to perform for leading world figures, such as Princess Diana, President Bill Clinton, and former United States Secretary of State Henry Kissinger during their visits to Hong Kong. He has had the pleasure of performing for Lee Kwan Yu, former Prime Minister of Singapore, Franz Vranitzky, Federal Chancellor of Austria, and Prince Faisal of Saudi Arabia. His Hong Kong clientele includes performing for Donald Tsang, Tung Chee Hwa, and Chris Patten, Chief Executives of Hong Kong, at private events hosted by Stanley Ho and Li Ka Shing, and for the wedding of Michelle Yeoh.

As a violinist and entertainer, Ricardo has played for audiences in China, Japan and Singapore, Canada, the United States, and India. He is a regular guest artist on the world's leading luxury cruise liners, playing on the Royal Princess, the Sea Princess, and the Queen Elizabeth 2 for over a decade. In 1997, Ricardo was voted the highest-rated entertainer during the Crystal Symphony's San Francisco-Alaska cruise, performing alongside host Barbara Walters.

His honours include being featured in Non-Resident Indian magazine (NRI) as a member of the Top 50 Non-Resident Indians worldwide, along with conductor Zubin Mehta, and Indian sitarist Ravi Shankar.  Recently, he was recognized by the Hong Kong Philharmonic Orchestra as their longest serving member. He has led several groups to perform in the HKPO’s education and outreach program. Ricardo is also a dedicated violin teacher, teaching at ESF schools and at his private studio in Central.

Seen as one of Hong Kong's most diverse musicians, Ricardo de Mello has the musicianship and the charisma to connect to his audience on a personal level. He is enjoying a most illustrious career, undoubtedly inspiring others through his music.