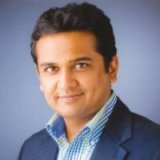 After completing his schooling from Campion School and his Masters in Commerce from Sydenham College, Mumbai, Alok went on to join his family knitwear business (Hindustan Hosiery). After a brief technical stint abroad, Alok started the export division of Hindustan Hosiery, where from a mere Rs. 4 lacs of export in 1994 the company was able to scale an export turnover of Rs. 8 crores in 1999. His clientele included International Chain Stores like C&A, Hennes & Mauritz and Karstadt amongst several others.

In August 1998, Alok left his family business to take up the challenge of creating a business proposition on the net, which would be a pioneer and leader in its own segment and thus was born India’s first and largest contest site- www.contests2win.com or c2w as it is more popularly known as today. Within a span of seven years, Alok has managed establish an Internet business with just Rs 5000 as his initial investment, that has survived the dot com bust and has actually carved a new business vertical for itself. c2w is a profitable dot com enterprise that has executed over 1500 interactive campaigns for over 300 Fortune 500 brands and has created a new interactive marketing format called ‘advergaming’

C2W further expanded to China, that lead to a formation of Mobile2win (www.mobile2win.com) m2w has a leadership position in Wireless marketing in China and India and is a leading player in the consumer vas business in the APAC region. Within 2 years of starting up, mobile2win has become a Stanford University case study for wireless marketing. Post mobile2win, Alok has incubated and launched two other companies – media2win in December 2004 - India’s first integrated full service Interactive agency – (see www.media2win.com) and Games2win in August 2005 - India’s first Casual Gaming portal – (see www.games2win.com) By revolutionizing the traditional concept of how brands communicate with consumers and injecting interactivity in their brand speak, Alok, as CEO of contests2win has helped several leading corporates such as HLL, Walt Disney, MTV, L’Oreal, Coke, GE, Procter & Gamble, LG, Pepsi, Sony Music, Kellogg’s, DHL, Channel [V], Revlon, BPL, Bajaj Auto and ICICI amongst others create promotions which are brand involving, interactive, innovative & memorable. These campaigns are now deployed on multi media formats that include Internet, Mobile and TV.

Alok Kejriwal, 36, firmly believes that the key to success lies in constant interaction, anticipating client’s requirements & needs and servicing clients at the speed of lightning. When not dabbling on the net, Alok listens to western classical music, meditates and reads books on Zen philosophy. He is a passionate poet and hosts www.templepoet.com, which is his personal site. His latest passion is collecting Indian contemporary art.