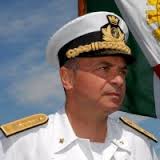 A man today of the Italian Navy commanded the rear admiral was born and brought up in Mumbai. Rear Admiral Rinaldo’s father came to Mumbai during the time of the British and while working there, he fell in love with a Goan lady Leena Pinto and married her and had three children. Recollecting his childhood days, the rear admiral speaks fondly about his school days in Campion School in Fort, Mumbai, where he studied till Grade VIII. After that his father sent him to Italy for naval studies as he always wanted, at least one of his son, to become a naval officer. After returning to Italy he joined the Naval Academy in Leghorn from where he graduated in 1975 with the rank of Ensign. After graduation he spent almost two years in the United States of America attending Pilot Training and in Dec.1977 was pinned with wings both for turbo prop A/C and Helicopters. From 1978 till 1982 he served as pilot both in land-based Helo Squadrons and on board various ships, flying mainly ASW and ASUW missions. In July 1982, in the rank of Lt., he took command of his first ship ITS LAMPO (phb), while a year later, in the rank of Lt.Cdr., he commanded the corvette AQUILA.  He was promoted Captain in 1995. On 1 July 2001 he was promoted to Rear Admiral (1*). On July 1s t 2005, he was promoted to Rear Admiral Upper Half

But the formative years in Mumbai under the guidance of his mother are something which the rear admiral cannot forget. He says that as his father worked for long hours as the owner of a hair cutting saloon, it was their mother who was the centre of gravity for them and took care of them and imbibed the strong Catholic values and culture in them. “My mother was originally from Margao, Goa, which is the neighboring state, south of Mumbai in India. And when my father finally decided to come back to Italy after 43 years, my mother had to make a tough but painful decision to leave her land and people. But my mother was an emotionally strong person and she came to Italy along with her husband and children,” Rear Admiral Rinaldo said in an exclusive chat with the Times of Oman.

Rear Admiral Rinaldo’s grandfather and his mother’s brothers were all in the merchant navy and it was only natural that his father wanted his three children to be in the navy. Rinaldo graduated from the Italian Naval Academy with the rank of Ensign in 1975 and spent two years in the US attending pilot training and was pinned with wings for turbo prop aircrafts and helicopters. After serving the Italian Navy in various positions between 1978 and 1995, Rinaldo was promoted as captain in December 1995. From June 2000 to August 2002, Rinaldo was the head of Maritime Policy Division in the General Plans Department. It was during this period that he was promoted to rear admiral single-star in July 2001. Rear Admiral Rinaldo participated in Operations Resolute Behavior / Enduring Freedom as Commander European Maritime Group and CTF 150 in the Indian Ocean. Rinaldo received yet another promotion as rear admiral two-star in July 2005 as recognition for his dedication and hard work.

The fondness for India runs through Rear Admiral Rinaldo even though he has been busy with work and family. “India has remained in the hearts of our brothers as my parents had good friends in
Mumbai. Last June when I went to New Delhi, on an official visit, I visited Mumbai and went down memory lane meeting up with some of my father’s friends and my mother’s relatives who are all in their 70s and 80s. It was a touching reunion,” the rear admiral recollected. The Indian Navy also organized a special visit to Campion School for Rear Admiral Rinaldo where he was able to meet some of his classmates and teachers after 40 years.

Rinaldo has the distinction of holding several prestigious appointments such as Commandant of the Cadet Course at the Naval Academy / Office of the National Armaments Director / Defence General Staff in the Office of the Chief of Defence / Head of the Maritime Policy Division in the General Plans Department / Italian Senior National Representative in USCENTCOM (Florida ) for Operation Enduring Freedom / Commander Italian Naval Task Group / Commander Italian/Spanish Amphibious Force / Commander European Maritime Group and CTF 150 (responsible for the Horn of Africa) participating in Operations Resolute Behaviour / Enduring Freedom. Since March 9, 2004 he has been appointed Chief of the General Plans Department. Rinaldo has earned, with honours, a BS in Maritime & Naval Science and a Masters in International & Diplomatic Science.

He is married to Rita and has three children, and they live in Rome. He enjoys reading, fresh air walks and jogging, while the sports he prefers to practice are tennis, swimming and horseback riding.

His brother Danilo was a student of the class of 1973.