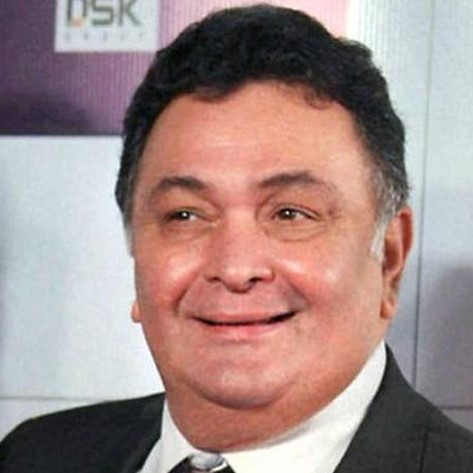 Rishi Kapoor (born 4 September 1952) is an Indian film actor producer and director known for his works in Hindi cinema. He received the National Film Award for his debut role as a child artist in Mera Naam Joker (1970). In 1974 he has garnered the Filmfare Best Actor Award for Bobby, and in 2008 he was honored with the Filmfare Lifetime Achievement Award. Rishi Kapoor debuted in his father's 1970 film, Mera Naam Joker, playing a child. Kapoor had his first lead role opposite Dimple Kapadia in the 1973 film Bobby. Since then, he played leading roles as the romantic lead in 92 films between 1973 and 2000, of which 41 were multi-starrer films. He appeared opposite his future wife Neetu Singh in twelve films.

Kapoor was born in Chembur, Mumbai in a Punjabi Hindu family[5][6][7] as Rishi Raj Kapoor. He was the second son of film director and star Raj Kapoor. He did his schooling with his brothers at Campion School, Mumbai and Mayo College, Ajmer. His brothers, Randhir Kapoor and Rajiv Kapoor, are also actors.

In 1999 he directed the film Aa Ab Laut Chalen, starring Rajesh Khanna, Aishwarya Rai, Akshaye Khanna in the lead. His last film as a romantic lead was the delayed Karobaar: The Business of Love (2000). Rishi Kapoor has acted in Heena, directed by his brother Randhir Kapoor and his father, Raj Kapoor, and in Prem Granth, a movie produced by the three Kapoor brothers (Rishi, Randhir and Rajiv Kapoor) and directed by Rajiv Kapoor.

He also acted in the movie Chintu Ji in which he plays himself. In 2012 he appeared in a villainous role in Agneepath and in the multi-starrer Housefull 2 where he appeared with brother Randhir Kapoor for the first time after Khazana in mid-1980s. He made a cameo appearance in Yash Chopra's Jab Tak Hai Jaan along with his wife.