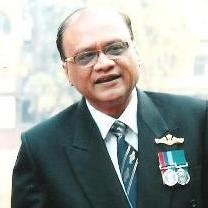 A Campionite of the 1969 ISC batch, Robin born on th August 1953 was an all rounder who participated with gusto in almost every activity in school, from elocution, field games, athletics, contributed school sports reports regularly to almost every issue of the ‘Campion Review’, and even tried out his talents  at the annual singing competition, all with varying degrees of success but much satisfaction. Robin believed that it was participation that counted.

Hailing from a Naval background (his father gave 30 years to the service), he chose to join Campion’s Junior Naval NCC Wing and was awarded the ‘Best Naval NCC Cadet Cup in 1969, a prize he holds among the proudest of his milestones.

Robin was elected School Captain for 1969 by an impressive margin, perhaps a recognition of his enthusiasm to join up in every team opportunity he could find.

A graduate of the National Defence Academy, Khadakvasla, on completion of his initial sea training, he was appointed the Missile Gunnery Officer of a fast attack missile boat, one of the Navy’s most potent and feared weapons of that time.

In 1978 he volunteered for Submarine Service and underwent the very rigorous basic submarine course which qualifies every aspiring young officer and sailor as a predator of the deep. The Submarine arm was a young and growing service and earning the badge that a submariner wears  is a proud moment. After his initial tenures on board subs, Robin was selected to specialize in  Torpedoes and anti Submarine Warfare, a course which schooled officers in the science of identifying and destroying submarines. It was good to learn how the other side thinks!

A few operational tenures later Robin qualified the Principal Control Officers course which was followed by a stint as the Second-in-Command of a sub.

In the early ‘80s, he was selected to undergo intensive training in the erstwhile USSR at their Naval Academy, to eventually be one of the Commissioning Crew of India’s first ever nuclear powered submarines. The hoisting of the tricolour on this deep attack platform was an historic moment in our Naval history. Robin was appointed the Missile & Gunnery Officer of the sub which was christened ‘Chakra’

In 1990, he qualified the Submarine Commanding Officer’s Course, every submarine officer’s dream, and Commanded two conventional subs for a period of 3 years, ploughing the depths on the East and West Coasts.

He was appointed to Naval Headquarters after completing his sea tenures. Looking to explore the excitement of an economy that was beginning to show signs of stirring, Robin opted to shift over to a career in the corporate world. He now heads the Marine Oil & Gas Division of a Shipping Logistics company in South Mumbai.

Robin’s wife Elaine has chosen to explore other depths and is immersed in social responsibility and community services. Their son, also an ex Campionite, and daughter pursue professional careers in Mumbai.