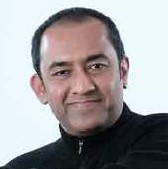 Many things in life do not have any explanation. There are things that happen which one would never imagine possible. They defy logic and pragmatism. Truth maybe as strange as fiction, is there a reason for our every action ?

How else can one describe Sanjay Maroo’s journey.

How did a man with no structured musical knowledge or official training create music that has touched the hearts of millions. How did a young boy with no instrument train himself to reach International Jazz stages. How does a person with no training of sound engineering, record and produce award winning songs all by himself.

This is that man’s real life story. Read on.

Sanjay Maroo was born 13th March 1965, in Mumbai to Rammohan and Sitadevi Maroo and was nurtured in a conservative Marwari family upbringing. He was barely four years old when the sounds of traditional Rajasthani wedding songs caught his fancy. He would plead and cry and insist on hearing the songs again and again till the magnetic spools tapes started to wear. It was as though there was a hypnotic trance that he fell into when the beautiful melodies of age old Rajasthani folk music touched his ears and soothed his soul.

By the age of 10, his desire to play drums came to light when he would play rhythms on wooden tables and any possibly any surface that would give him the feedback of a percussive sound.

But for a Marwari family boy to play music and that too percussion, was rather unheard of in 1975 and mostly looked down upon.

Somehow he managed to swing an Acoustic guitar but instead of working on the strings, he would find it more interesting rhythms to play on the sonic box. It was a short lived romance.

Some months later a bongo set came along which was somewhat played a bit more than the Guitar but that too did not satisfy the desire of playing a full drum kit and only ignited the desire for more than a few sounds. The yearning for more continued.

Around the age of 15, when there was no drum set in sight, the desperation found outlet in the act of miming the actions of a drummer, in the air. The practice of Air drumming which started as a vent, became such a passion that he would spend several hours a day with plain drumsticks in hand miming the imagined actions of the drummers he was listening to.

A set of mirrors in his Parents room, gave him the reflection of multiple images and created an illusion that would enhance his visualization of performing in front of a huge audience. The 2 in 1 radio set played some of the earliest Rock and Pop that he was introduced to by like-minded friends.

The family thought he had lost it.

How do you blame the Parents of a 15 year old who spends hours each day just acting in front of a mirror and imagining that he was in the midst of some amazing concert performance.

For most of their adult life, Sanjay’s Father and Mom, sang Bhajans everyday during Puja with a harmonium and tambourine. So there was an inherent love for music in the family but no once could imagine the level of yearning that Sanjay had developed.

One day when his Father saw him lost in his dream world, not responding even when he was called out to, he recognized that there was a trance state that he was witnessing and instead of disturbing the mood, he watched on till Sanjay came out of the space that he was lost in.

Profuse sweat and a hot blister were witness to the joy that had been experienced and his Father at that moment took an instant decision to buy Sanjay a real kit.

Around 1980 there were very few musical equipment stores in Mumbai and it was a big deal to buy a drum set so a used 2nd hand kit was purchased from Furtados at Dhobi Talao. Rickety and rusted, it was better than playing in the Air, and something was better than nothing, so with great enthusiasm the kit was brought home and cleaned.

But the skins were dead and so were the pedals. The Cymbals were metal plates and the glorious sounds of the best recordings that the Air drummer was accustomed playing to, were sorely missing. Disaster!!!

Ridicule and scorn await those who dare to dream but fail.

It was a shattering experience for the budding drummer to deal with, to return back the kit to the store. Reluctantly the store took it back for a quarter less value than what it was sold 3 days before. Such are the travails of life for a 16 year old.

For the next few weeks and months it was a period of introspection of whether there was a real possibility or was it just all a head thing. But time and again the thoughts kept growing that if the gear had been in decent condition, the adaptation from the fluidity of the Air to the bounce of a skin would have been easier.

Jai Hind College was the cultural hot spot of Southern Mumbai Colleges and has contributed some of India’s best known artistes, musicians, and Industrialists.

As a first year freshman, Sanjay sang in the talent contest and was awarded a special mention by the Judge Anoop Jalota. That was the beginning of the vocal journey. But the drum journey was already more travelled on and the urge to go on was ever increasing.

Sanjay hired a drum set for the talent contest and with a few hours of practice he managed to transfer the Air playing skills to reality. He was awarded a 2nd place in the contest.

2 weeks later, a spanking new Drum set which his Father had ordered for him as a reward for the certificate, was ready. This time around the drum set was shiny and was granted a corner of the living room of the home. Marwari family and visitors would sometimes mockingly ask what it was. Sanjay Dad took pride in showing his Son’s talents to them and would eventually earn praise and respect from the sceptics.

Quite a beginning for a journey, which is now over 30 years in progress.