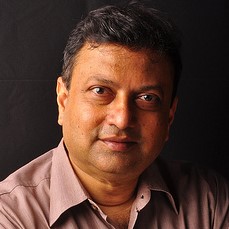 Dr. Nagarkatti is a specialist in Major Ambulatory Surgery, he performs "ordinary" major operations in an extraordinary way so as to keep his patients ambulatory (walking) and out of the hospital within a couple of hours. He may be remembered as — "the surgeon who keeps his patients out of the hospital!" His special fields of interest are herniology and proctology.

Dr. Shantanu Udhav Nagarkatti was born as the son of a Surgeon on April 22, 1955 in a brahminical family with pious traditions. He was exposed to both Bhagavad-Gita lectures and surgical operations ever since the age of five years.

He graduated from Grant Medical College in 1977 and acquired his Masters Degree in Surgery in 1981 from the same institution. During his academic career, he received many prizes and scholarships in Surgery including the Khan Bahadur Rustomjee Gold Medal in Surgery for standing first in surgery and the prestigious A.K. Dalal scholarship. The marks he was awarded in surgery were not matched in Grant Medical College for five years until the examination system changed.

After he qualified as a surgeon, he trained for 7 years in Gastrointestinal Surgery and 5 years in Cancer Surgery with internationally acknowledged leaders in their fields at major teaching hospitals in Bombay. Dr. Nagarkatti presently combines a unique practice in Major Ambulatory Surgery in South Mumbai with the role of a Associate Professor of Surgery in Mumbai University through a private medical college and charitable hospital in North Mumbai.

In the early 90’s Dr. Nagarkatti conceived and set up the first private Medical Information Technology Center in South Asia with the Seth Kishorilal Agarwal Charitable Trust searching electronic databases on what was then the Easynet — long years before the Internet came to India! As the Honorary Medical Director he coordinated its activities that included Selective dissemination of medical information from bank of CD ROMs and On-line Medical Databases to Medical Consultants and individualized medical research as a “Second Opinion” for patients. From March 1996 to March 1997, he has also written regular feature articles on medical and health related issues in Savvy magazine.
At present, he is engaged in planning the first Institute in Asia for Medical Computer Education at his medical college and is in the process of working on Web enabled health service. With an abiding interest in Medical Education he conducts the private Center for Advanced Medical Education that trains medical students for the MBBS and Post Graduate entrance examinations with audiovisuals and multimedia.

As a healer, Dr. Nagarkatti has a burning interest in the relief of human suffering. This initiated him into a deep study of Psychology, Philosophy, Religion and Spirituality. During this search he was associated and involved with several religious organizations and saintly persons. Since the last 10 years, Dr. Nagarkatti committed himself to teaching and living the message of the Bhagavad-Gita. His 8 day lecture course on the Science of Self Realization with over 1,000 color 35 mm & overhead slides and course materials has been given over the world from America. Europe and Africa to South East Asia and the Middle East.

He delivers lectures on the Bhagavad-Gita, chapter by chapter and verse by verse at the Prem Puri Ashram, Babulnath, Chowpatty every Thursday from 7.30 p.m. to 9.30 p.m. Using the best techniques in modern science and ancient spirituality, Dr. Nagarkatti convenes frequent courses on comprehensive Stress Management. He has been interviewed and his stress management programs have appeared on most of the major Indian television channels including Zee, Star News and Aaj Tak.

In February 2001, Dr. Nagarkatti visited the United Kingdom to participate in a training certified by Dr. Robert Cialdini, the Regent Professor of Psychology at the University of Arizona. The course on the Psychology of Influence, Principles and Practice is the definitive training program on Influence in the world today.

Dr. Nagarkatti also conducts retreats for teaching meditation, yoga and relaxation techniques. A pioneer in studying electronic aids for meditation, with their use in medicine, he intends to set up a Biofeedback Mind Laboratory in the near future.