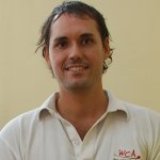 Amar Haksar is running the CCI Squash Academy as Head Coach since a year. He has proven himself to be an effective coach with the top players at the Academy making rapid strides in improving their squash. Amar comes across as a warm and gentle person, whom kids love to be with. In a chat with Prosquash, Amar revealed some interesting facts about himself.

Whilst in school, Amar was a state level Badminton player, based in CCI. His schoolmate Adrian Ezra (India’s youngest Mens  National Tiile holder) convinced Amar to switch to Squash, and in no time at all , he represented Maharashtra in the inter state Nationals. Amar played several tournaments held within Bombay., and his best result was Top-8 in CCI Western India in 1989-1990. He left for USA to study at the Bostan University, but could not play Squash for 4-5 years due to a torn ligament. However, he kept in touch with Squash players at the Bostan Athletic club,  and did hit the ball once in while. He then shifted to California to work there, and resumed playing Squash at the Decathlon Club. He played local tournaments and traveled all across America for tournaments. His best performance in USA was being Runners Up in Florida state Championship in semi-pro league. It was in Decathlon Club that he tried his hand at Coaching. To gain knowledge, he attended seminars at seattle in conjunction with tournaments. Amar returned to CCI in 2003.

Amar feels that the players in the U-19 and U-11 have excellent prospects. His philosophy of coaching is that while progress in the sport is important, coaching must enable players to devlope life skills. As a teacher, he aims to develop good values and desire to make best efforts. He is satisfied that his players share a good rapport with him.

Interestingly, Amar has cycled across USA to raise funds for Leukemia. The motivation for this challenging adventure came from his Mom’s survival from Leukemia. He managed to raised US$8000/-. In fact, Amar’s reason for returning to India is to contribute more to his homeland. We wish him the best of luck.