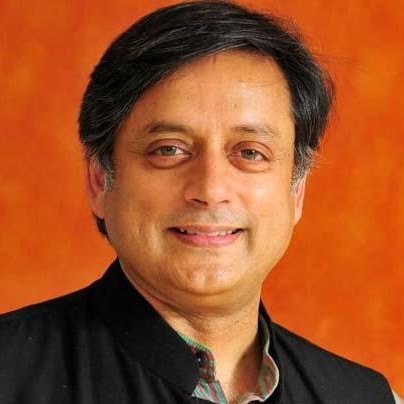 An author, politician, and former international civil servant, Shashi Tharoor straddles several worlds of experience. Currently a second-term Lok Sabha MP representing the Thiruvananthapuram constituency and Chairman of the Parliamentary Standing Committee on External Affairs, he has previously served as Minister of State for Human Resource Development and Minister of State for External Affairs in the Government of India. During his nearly three-decade long prior career at the United Nations, he served as a peacekeeper, refugee worker, and administrator at the highest levels, serving as Under-Secretary General during Kofi Annan's leadership of the organisation. Dr. Tharoor is also an award-winning author of works of both fiction as well as non-fiction, with his fifteenth book due for release in December 2014.

Born in London in 1956, Dr. Tharoor was educated in India and the United States, completing a PhD in 1978 at the Fletcher School of Law and Diplomacy at the Tufts University. While there, he received the Robert B. Stewart Prize for Best Student and also helped found and served as the first Editor of the Fletcher Forum of International Affairs, a journal now in its 39th year. Dr. Tharoor was also awarded an honorary D.Litt by the University of Puget Sound and a Doctorate Honoris Causa in History by the University of Bucharest. In 1998 the World Economic Forum in Davos named him a Global Leader of Tomorrow. He is also a recipient of several awards that include a Commonwealth Writers Prize and the Pravasi Bharatiya Samman, India's highest honour for overseas nationals. In 2012 the King of Spain awarded him the Encomienda de la Real Order Espanola de Carlos III. Among numerous other awards are one for "New Age Politician of the Year" from NDTV, the Hakim Khan Sur Award for National Integration, and the Priyadarshini Award for Excellence in Diplomacy.

Shashi Tharoor was a pioneer in using social media as an instrument of political interaction. Till 2013 he was India's most-followed politician on Twitter, until being overtaken that year by the current Prime Minister, Narendra Modi. He was the first Indian to reach 10,000 and 100,000 followers on the medium, and currently has 2.3 million followers.

Following his long career at the United Nations, which included key responsibilities in peace-keeping after the Cold War and serving as senior adviser to the Secretary-General, in addition to his role as Under-Secretary-General for Communications and Public Information, Dr. Tharoor returned to India and was elected to Parliament in 2009. Between his stints as a government minister, he also served as Member-Convenor of the Parliamentary Forum on Disaster Management, and as a member of the Standing Committee on External Affairs; the Consultative Committee on Defence, the Public Accounts Committee; and the Joint Parliamentary Committee on Telecoms. He has participated prominently in many of the most important debates of the 15th Lok Sabha in India, and in his current second term sits in the Opposition benches, also serving as the Chairman of the Standing Committee on External Affairs and a member of the Standing Committee on Rules.

Dr. Tharoor is also a recognised authority on India, especially regarding its recent economic transformation and future prospects, globalisation, freedom of the press, human rights, literacy, culture, foreign affairs, cricket and more, and is a compelling and effective speaker, fluent in English, French as well as in Malayalam and Hindi. He is the author of hundreds of articles, op-eds, and book reviews in a wide range of publications including the New York Times, Washington Post, Los Angeles Times, International Herald Tribune, TIME, Newsweek, and The Times of India. He has served for two years as a Contributing Editor and occasional columnist for Newsweek International. Shashi Tharoor has authored regular columns for the Indian Express (1991-93 and 1996-2001), The Hindu (2001-2008), The Times of India (2007-2009), The Asian Age/Deccan Chronicle (2010-2012) and Mail Today 2012); he also writes regularly on ndtv.com and publishes an internationally syndicated monthly column through Project Syndicate.

His first non-fiction book, Reasons of State (1981) is a study of Indian foreign-policy making, while his India: From Midnight to the Millennium (1997) is an acclaimed analysis of contemporary India, cited by President Clinton in his address to the Indian Parliament. Kerala: God's Own Country (2002) was a collaboration with the artist MF Hussain, dedicated to his home state while Nehru: The Invention of India (2003) is a biography of Pandit Nehru, India's first Prime Minister, and an exposition on his intellectual outlook and vision. Bookless in Baghdad (2005) is a collection of literary essays while The Elephant, the Tiger, and the Cellphone (2007) compiles essays about contemporary Indian politics, society, and culture. Co-authored with Shaharyar Khan, Shadows Across the Playing Field (2009) is a survey of India-Pakistan cricket, while Pax Indica (2012) is a study of India's foreign relations and global strategy. India: The Future is Now (2013) is a compilation of essays by young Parliamentarians in the country edited and with an introductory essay by Dr. Tharoor. India Shastra (2015), a collection of essays on contemporary India,  is scheduled for publication in January 2015.

His three novels are the classic The Great Indian Novel (1989), which is required reading in several courses on post-colonial literature and whose Silver Jubilee Edition, after 43 reprints in India, is out in September 2014; Riot (2001) a searing examination of Hindu-Muslim violence in contemporary India; and Show Business (1992), which received a front-page accolade in the New York Times Book Review and has since been made into a motion picture,  Bollywood . He has also authored a collection of short stories, The Five Dollar Smile (1990) and the text of a coffee-table book with the photographer Ferrante Ferranti, India (2008). Dr. Tharoor's books have also been translated into French, German, Italian, Polish, Romanian, Russian, Spanish, as well as Bengali, Malayalam and Marathi.

Prior to embarking on his political career, Shashi Tharoor also served on the Board of Overseers of the Fletcher School of Law and Diplomacy, the Board of Trustees of the Aspen Institute, and the Advisory Boards of the Indo-American Arts Council, the American India Foundation, the World Policy Journal, the Virtue Foundation and the human rights organization Breakthrough. A prominent human rights advocate, Dr. Tharoor was appointed an International Adviser to the International Committee of the Red Cross in Geneva for the period 2008-2011. He was also a Fellow of the New York Institute of the Humanities and the Patron of the Dubai Modern School, and serves on the Advisory Council of the Hague Institute for International Justice.

Dr. Tharoor's late wife, Sunanda P Tharoor (formerly Sunanda Pushkar), a businesswoman and philanthropist, passed away in January 2014. He is the father of twin sons, Ishaan and Kanishk, and of Sunanda's son, Shiv. Dr. Tharoor resides in Thiruvananthapuram and in New Delhi, India..