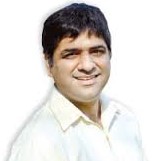 Shiraz Naval Minwalla is an Indian theoretical physicist and string theorist. He is a faculty member in the Department of Theoretical Physics at Tata Institute of Fundamental Research, Mumbai. Prior to his present position, he was a Harvard Junior Fellow and subsequently an Assistant Professor at Harvard University

Born in Mumbai, Maharashtra, India, in 1973, in a Zoroastrian family, Minwalla graduated from Indian Institute of Technology Kanpur in 1995. He later moved to Princeton University to earn his Ph.D. under the guidance of Nathan Seiberg.
Awards

Minwalla was awarded the Swarnajayanti Fellowship 2005-06 by the Department of Science & Technology, Government of India. He was awarded the ICTP Prize in 2010 and the Shanti Swarup Bhatnagar Prize for Science and Technology, the highest science award in India, in the physical sciences category in 2011. He was awarded the Infosys Prize 2013 in the field of Physical Sciences by the Infosys Science Foundation. He was awarded the 2014 New Horizons in Physics Prize by the Fundamental Physics Prize for "his pioneering contributions to the study of string theory and quantum field theory; and in particular his work on the connection between the equations of fluid dynamics and Albert Einstein's equations of general relativity."

Notable contributions to the field