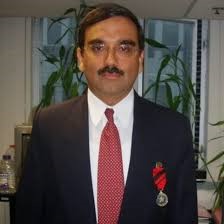 Sudhir Gulab Gidwani born on 3 November 1961 in Kobe,  JAPAN is an Indian living in Hong Kong

Diplomas
Obtained a Diploma in Public Speaking from the Indo-American Society in June 1977. In June 1978 passed the Government Commercial Diploma examination in First Class and secured fourth rank in the state of Maharashtra.

University Degree
Awarded the Bachelor of Commerce Degree from the Bombay University in May 1982 and was placed in First Class.

Professional Qualification
Qualified as a Chartered Accountant in July 1984.

Worked with Ernst & Whinney, Certified Public Accountants, in Hong Kong (presently known as Ernst & Young) in their insolvency, audit and investigation departments during the period 1984 to 1986.

Since September 1986, I have been employed by the Independent Commission Against Corruption (ICAC),  a law enforcement agency in Hong Kong and have been primarily posted to the Financial Investigation Section.  I currently hold the rank of  Chief Investigator in the Operations Department.

My job responsibilities include:

MERITS
Commendations
Commendation received from the Director of Operations, ICAC in March 1991 for
professional ability, energy, determination and devotion of duty of a very high order
during the course of a complex fraud investigation resulting in the conviction of a Director and Manager of a Deposit taking Company.

Certificate of Appreciation received from the Director of United States Secret Service in May 1995, in recognition of superior contributions to the law enforcement responsibilities.

Commendation received from the Directorate of ICAC in September 1995 for professionalism and dedication to duty in a joint operation with the Commercial Crime Bureau of the Royal Hong Kong Police leading to the conviction of two persons involved in counterfeiting US currency.

Commendation received from the Directorate of ICAC in April 1997 for outstanding professional ability, determination, and meticulous attention to detail in the production and preparation of accounting evidence in the investigation of a complex corruption related bank fraud involving HK$ 127 million in which the Chairman of a public listed company was convicted and sentenced to imprisonment.

Assistant Director’s Commendation received in March 1999 for outstanding professional ability, determination and devotion to duty of a very high order leading to the conviction and imprisonment of one person in New Zealand for an offence of wilfully attempting to pervert the course of justice in New Zealand and elsewhere.

Attended in July 2007 the Annual conference of the Association of Certified Fraud Examiners in Orlando, USA

Attended in April – May 2009 a specialised course on Advanced Financial Investigative Techniques conducted by the Internal Revenue Service, Department  of Treasury, USA.

SPORT
Qualified Cricket Umpire and member of the Association of Cricket Officials, English Cricket Board