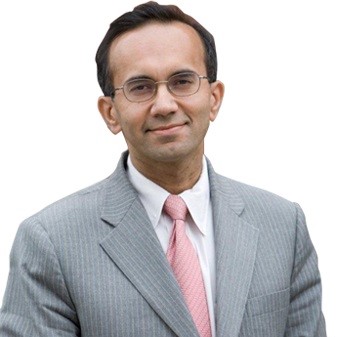 Tarun Khanna (born; 1968) is an Indian-born American academic, author, and an economic strategist. He is currently the Jorge Paulo Lemann professor at Harvard Business School; where he is a member of the strategy group, and the director of Harvard University’s South Asia initiative since 2010

He joined the HBS faculty in 1993; after obtaining a B.S. degree in electrical engineering & computer science from Princeton University (1988), and a Ph.D. in business economics from Harvard Business School (1993). His areas of interests include diasporas, economic development, emerging markets, globalization, international business, and strategy.

Khanna has authored several scholarly works, articles and books; with the most notable being, his 2008 book - Billions of Entrepreneurs: How China and India are Reshaping Their Futures and Yours, and 2010 co-authored book - Winning in Emerging Markets: A Roadmap for Strategy and Execution.

In 2007, he was nominated to be a young global leader (under 40) by the World Economic Forum; and in 2009, elected as a fellow of the Academy of International Business. Khanna also sits on the boards of AES Corporation, SKS Microfinance, GVK Bio Sciences and TVS Logistics

Career
Academic career: 1993 to present
After earning his PhD, and an interim stint on Wall Street, Khanna joined the HBS faculty in 1993 as an associate professor of business administration, and later in 1998 became professor and a Novartis fellow. In May 2004, he was appointed Jorge Paulo Lemann professor of economics. Since then, he has dedicated his academic schedule on studying, and working with multinational and indigenous companies, and investors, in emerging markets worldwide.

He has served as the course head of the required 'strategy course' in the Harvard MBA program; and has chaired the executive education program on strategy, leadership, and governance. He is the director of Harvard University's South Asia initiative since 2010, and also the faculty chair for HBS activities in India. Currently, he teaches in Harvard's comprehensive general management executive education programs. Khanna has been a prominent interviewer in the Creating Emerging Markets project, designed to facilitate research and teaching on the business history of emerging markets, which includes interviews with long-time leaders of firms and NGOs in Latin America, South Asia, Turkey and Africa.

Bibliography
Dr. Khanna’s scholarly works and articles have been published in a number of economics and management journals. He also authored / co-authored books on topics - drivers of entrepreneurship in China and India, and how to approach and be successful in emerging markets. A selection of his books and articles, are the following;

In 2007, he was nominated to be a young global leader (under 40) by the World Economic Forum; and in 2009, elected as a fellow of the Academy of International Business

Personal life
He is married; and resides in Newton, Massachusetts with his wife, daughter and son.